After waiting a week to find out what our bees did next, it rained. Then it poured. So it seemed the Mystery of the July Queens would have to wait.

Last week Emily and I made the unexpected discovery of five queen cells in Rose’s hive. The jury was out on whether our bees were planning to swarm or trying to replace Queen Rose who was MIA for a second week.

A break in the clouds came and we rushed to the apiary to find we were the only ones mad enough to visit the bees on such a blustery day. I was expecting to find very grumpy honeybees, because our little ladies don’t like the rain. Instead, we found them behaving quite strangely.

Someone forgot her umbrella – instead of flying in and out, our bees were clustered at the entrance of the hive out of the rain.

Emily thought they might be fanning their wings to create warm air vents, keeping the baby bees in the brood toasty and dry.

Fascinated, we lingered a little too long and forgot basic beekeeping 101 – don’t block the entrance of the hive. When we moved away there was a little dark cloud of bees hovering behind us, patiently waiting to enter the hive with their pollen loads. We made them wait in the rain, how awful!

We decided not to disturb Queen Rosemary’s hive in unsettled weather and moved on to Queen Rose’s hive. A ray of sunshine penetrated the dark canopy of the apiary, so we took a look inside hoping that our bees hadn’t swarmed.

Our ladies were there, along with a bright golden New Zealand intruder. 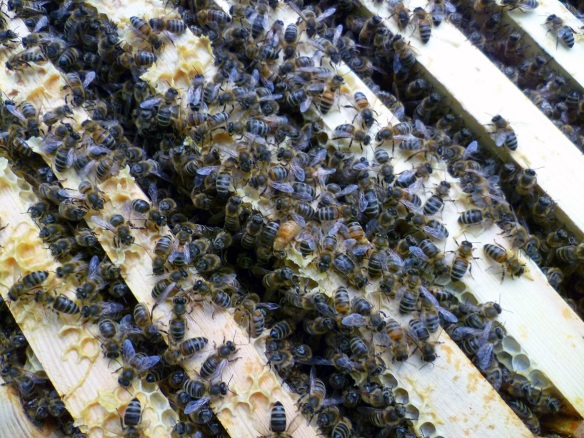 Can you spot the golden New Zealand honeybee among our darker British bees?

I suspect she is one of Albert’s bees who bribed her way into our hive with some good pollen.

Three of the five queen cells were no longer there. I can only imagine the dark turn of events during the week: a new queen, or two, hatched and tore down the cells of her rival sisters in an act of royal genocide. There was no sign of Rose and I suspect her crown has been passed. We’ll miss her – she was a good queen who gave us happy-tempered, hard-working bees. But such is life in the hive.

We found two remaining queen cells heavily covered in workers. I wondered if they were ‘taking down’ these cells, but Emily thought they might be trapping the unhatched queens as an insurance policy should the new queen not survive her mating flight. ‘Trapped queens “quack” in their cells,’ said Emily. ‘To tell the workers to let them out.’

It was then that we remembered beekeeping 101 again – don’t open a hive for a couple of weeks when you suspect a new queen has hatched. A hive inspection could upset a queen returning from her mating flight and, not settled in the hive, she may abscond. Drat! In our curiosity to see if our bees had swarmed or chosen supercedure, we forgot that. That’s why our bees have queens-in-waiting – as insurance against our blunders. Silly beekeepers!

As we finished our inspection we came across yet more strange behaviour. Look what our bees have done, the little weirdos! 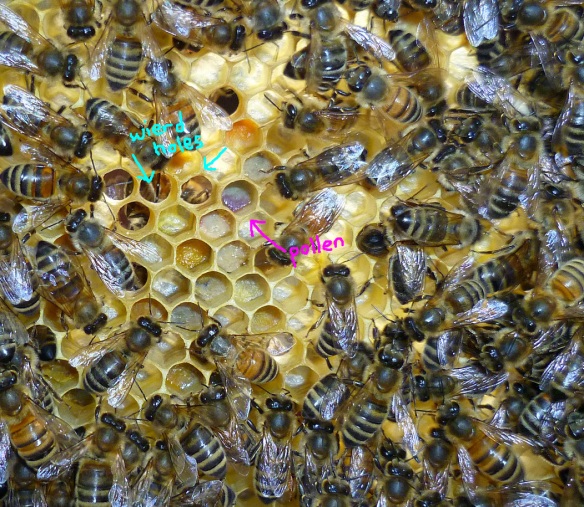 A rainbow of pollen on the honeycomb (pink arrow) but why are our bees eating holes through the wax (blue arrows)?

They had eaten tiny little holes through the wax. They are not supposed to do that! Perfectly round, I caught a couple of workers peering at each other through a peephole like these were the best thing ever. Perhaps this is what happens while the queen is away – anarchy. Does anyone know why our bees would do this?

More rainbows of brightly coloured pollen in the honeycomb suggests where our bees get their honey. Blue pollen may be from poppies.

It's a bit blurry, but peer closely and you'll see a worker carrying a basket of blue pollen. This might be from a poppy.

As we closed the hive, someone sped past and dropped a red dollop of propolis on the frames we had just cleaned. The culprit was a blur.

Hey! We just cleaned that. The culprit is caught on camera.

The forecast for the rest of the weekend was rain and more rain, so Emily topped up the feeder with syrup and the usual suspects clambered excitedly to drink manna from heaven.

During our inspection, we noticed that some of our bees had white stripes on their thorax, which wouldn’t rub off with our fingers. We found this same phenomenon on bees flying into other hives at the apiary.

White-striped honeybees that have collected pollen and nectar from Himalayan balsam – more clues about the origins of the honey from our apiary!

When bees forage on Himalayan balsam the white pollen rubs their back and leaves a white stripe that they can’t clean off. This also happens to wasps. So if you see a bee or wasp flying around with a white stripe, you know what flower they have just visited.

Not to be confused with white-bottomed bumble bees.