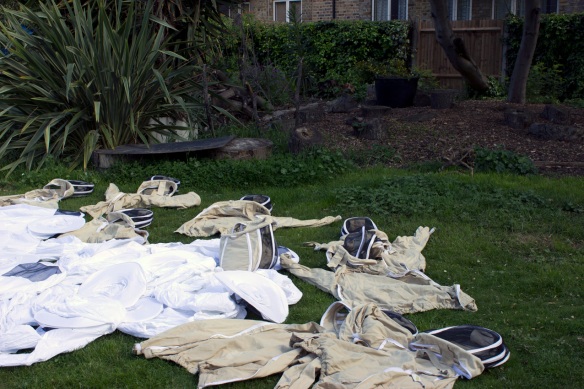 ‘We are going to talk about varroa, which you will ignore at your peril,’ said John Chapple, chair of the London Beekeepers Association (LBKA) in his opening comments at Bee Health Day. Emily and me had attended this varroa workshop with talks by the National Bee Unit’s (NBA) inspectors and hosted by LBKA, because it is vital that all beekeepers remain up-to-date on how to manage the varroa mite.

Varroa destructor – a truly insidious creature – is the mite that propelled the plight of the honeybee into the public eye. While there are many causes behind the decline of the honeybee, varroa is responsible for more colony losses than any other bee disease. 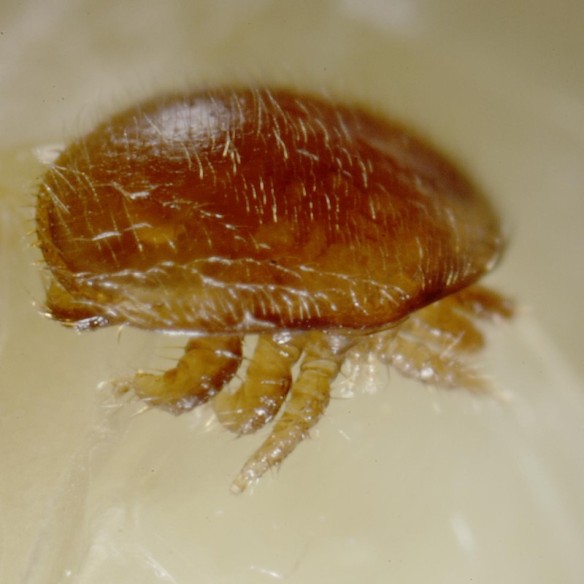 Varroa destructor – the insidious mite that afflicts honeybees and infects them with nasty viruses. © Crown copyright 2012

Since its discovery in England in 1992, the mite has spread rapidly across the country and invaded the hives of unsuspecting honeybees. This was a reconnaissance mission – Emily and me had come to find out more about the enemy.

We learned a lot – so here are highlights.

‘Imagine what it feels like to have one of these on your back,’ said Alan, holding a life scale drawing of a varroa mite on his shoulder. ‘It would get in your way.’ Varroa mites feed on adult honeybees and their brood by clinging tooth and claw to suck their blood (picture a small, vampiric rabbit biting your back), weakening the bee’s immune system and transmitting a vile cocktail of harmful pathogens. Varroa accounts for thousands of colony losses each year in comparison to 800 hives lost annually due to European foul brood or American foul brood.

Varroa mites clinging to the back of a honeybee and sucking its blood! © Crown copyright 2012

As a parasite that frequently kills its host, varroa might not seem very effective. However, it was originally a parasite of the Asian honeybee (Apis cerana) which has natural defenses against the mite, and spread to the defenceless European honeybee (Apis mellifera) through globalisation and the transport of honeybees around the world.

Varroa is incredibly well-adapted to the life cycle of the honeybee and spends its entire life within the colony. It is so highly specialised that the female mite can sense the pheromone given off by bee larvae ready to be capped before the worker bees! The mother mite buries herself underneath the larval food unseen by workers as they cap the cell. Sealed inside, she waits for the larva to eat the food and release her. The mite then feeds on the juicy larva as it develops into a bee. During this time, she lays eggs that hatch and mate with each other (inbreeding is not a problem for varroa) and the entire mite family are released when the fully-grown bee emerges from its cell. Insidious. 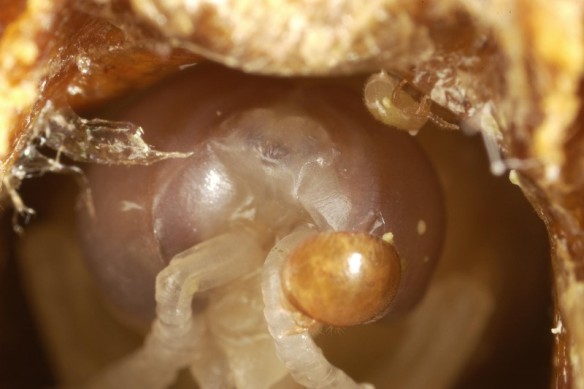 Mother mites hide in cells and then feed on bee larvae as they develop. © Crown copyright 2012

Varroa are hitchhikers too, and spread from hive to hive by drifting bees who are mostly drones. ‘Drones can do bed and breakfast in any hive,’ said Alan. ‘The workers don’t see them as a threat and so they are well tolerated.’ Beekeepers may be unaware of varroa in their hives during spring and summer, because the mites are mostly hidden within the brood. Varroa particularly prefer drone brood because they take longer to develop, which gives the mite more time inside the cell. Queen cells are rarely invaded by varroa because the queen larva develops very quickly, thus if a queen cell does have varroa this indicates that the colony is overrun.

Varroa counts may appear to rise suddenly in hives at the end of summer, but this is because there is less brood as the queen slows down her egg laying in preparation for winter. Winter or summer, varroa is always there.

You may not be able to see the varroa in your hive, but it is there.

Varroa is a problem to larger colonies because they have more brood, whereas its natural host, the Asian honeybee, tends to live in smaller colonies. Varroa can also rise to harmful levels inside the hive when the colony does not swarm very often or is prevented from swarming, whereas again the Asian honeybee swarms frequently. Swarming is a natural method of varroa control because the queen flies away from the nest with half her bees and leaves behind the brood and varroa.

This is a risk of beekeeping, explained Alan. European bees are usually kept in large ‘super’ hives, sometimes with double brood boxes, in order for the beekeeper to get more honey. Their natural swarming instinct is managed by various swarm control methods to make sure that half the colony doesn’t fly off with the honey! However, beekeepers often report that their biggest and strongest colonies succumb to varroa over winter. So it seems the mite problem is exacerbated by the lifestyle of bees living in hives and, unlike feral honeybees living in the wild, requires good husbandry methods to keep it under control.

Varroa can cause a lot of damage to colonies as seen by this varroa-infested hive. The comb and bees look very unhealthy, or, um, dead. © Crown copyright 2012

Alan’s talk prompted plenty of questions from the audience, including can we breed varroa-resistant bees?

No one has bred varroa-resistant bees yet and using breeding principles to replace good husbandry is risky, because when a queen swarms her progeny will mate with local drones that are not varroa-resistant. In a city like London where most bees are mongrels, it would not be possible to control breeding. It may be possible that a varroa-resistant bee is bred in future, or that Apis mellifera itself adapts to life with the mite, but in the meantime good husbandry techniques are essential to control varroa.

If you keep bees you keep varroa…

…I remembered this comment from Scott, a member of Ealing’s beekeepers, at last year’s Bee Health Day. All beekeepers keep varroa as well as bees no matter what we do or don’t do with our hives, so we may as well learn how to ‘keep’ it!

Alan took us through the treatment options available to beekeepers to kill varroa many of which are based on naturally occurring chemicals, such as thymol and oxalic acid. He explained that beekeepers are also dealing with a food product (honey) and so need to be careful what treatments they use and when. For example, the thymol-based Apistan varroa control strips taints honey with a strong smell and can only be use after the honey crop is removed at the end of the season. 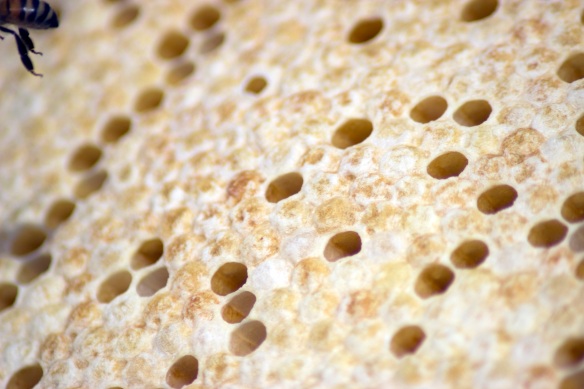 While you can treat the brood nest for varroa, treatments shouldn’t be used while supers are on the hive and being filled with honey. Here I caught a little bee flying off from the comb!

The group asked about the effectiveness of using natural methods like sugar dusting. Bee are dusted in a light coating of icing sugar, which encourages them to clean each other and knock off the varroa. However, sugar dusting only knocks off around 29% of varroa mites and an effective treatment must kill 80% of the mites. It is a useful method during spring and summer when the supers are on the hive, because it won’t taint the honey, but it should not be used alone against varroa. Alan advised a multi-approach to managing varroa and to keep records of what works and what doesn’t.

A practical apiary session followed with Caroline Washington, bee inspector for North of the Thames, and the inspector who visits our apiary. Caroline is an effortlessly glamorous beekeeper and very, very firm. No bee would misbehave for Caroline! 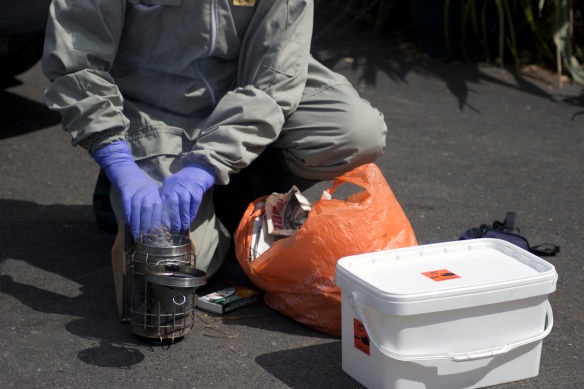 Caroline gets her smoker going with a pine cone.

After getting her smoker going with a pine comb, Caroline demonstrated an inspection of a hive that she described as ‘very boring’. I think the bees were too in awe of Caroline to do anything other than what they should. 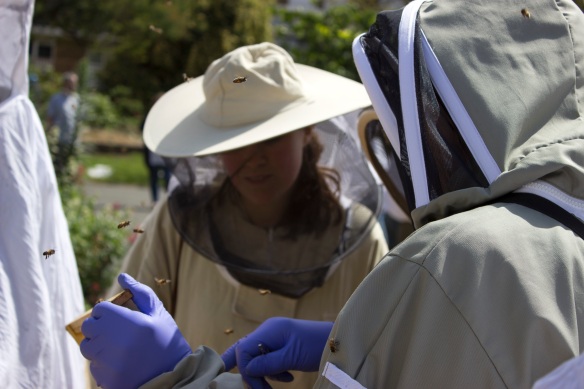 The bees behave for Caroline while she inspects their hive. In the background, my lovely hive partner, Emily!

It was a lot of learning for one Sunday morning, so we took a break for lunch and sat on the lawn of LBKA’s base at Roots and Shoots in Lambeth.

The afternoon sessions kicked off with a talk about the world of bee viruses by Caroline. She listed the top six bee viruses that we should all know:

The virus that should most interest London beekeepers is deformed wing virus, which is often transmitted to queens when they mate with infected drones. Caroline commented that there has been much talk lately in the beekeeping world about failing queens, but no one ever thinks to look at the drones.

I demonstrated uncanny queen-spotting skills in the earlier apiary practical session by spotting this queen winding her way across the frame before it had even been lifted out!

The Food and Environment Research Agency (FERA) suggests that deformed wing virus is associated with most colony collapse, and the problem has become worse because there are many more beekeepers now and not all are managing varroa. Bees have the same problem as people living in crowded cities like London – disease spreads faster. Hives that are not treated for varroa will have bees that will infect neighbouring hives, which seem very antisocial! 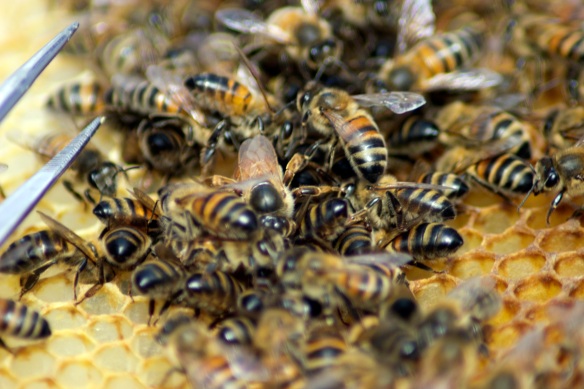 ‘The claw chooses who will go and who will stay’

The most valuable lesson that Caroline gave us was to use a pair of tweezers for inspections – not to groom the bees and make them more lovely, but to look for nasty stuff on the comb. ‘I have been trying to get beekeepers to look more closely at the comb for years,’ said Caroline. ‘Bad comb is easier to spot than disease or mites.’ Caroline passed round some particularly grotty-looking frames and got us to have a close look at them.

The final workshop of the day was with Brian McCallum who talked us through a practical checklist of good husbandry including using open mesh floors and varroa monitoring boards, a varroa calculator (available on the NBU website) and drone monitoring.

Drone monitoring is an effective method of checking levels of varroa in a hive, because the mites are most attracted to drone brood. This is done by taking out of frame of drone brood and de-capping it, then counting how many larvae are infected with varroa rather than counting the number of mites. This number can then be checked on the NBU varroa calculator, which will indicate if varroa has risen to harmful levels and requires treatment.

A capping fork is used to un-cap drone brood on a test frame and to count the number of larvae that have varroa – like the one here with a big red mite. © Crown copyright 2012

At the end of the day I suspected that my brain is not much bigger than a bee’s because it was hurting quite a bit. So Emily and me wandered round the beautiful garden of Roots and Shoots, and were introduced to the resident solitary bees by the gardener, David Perkins.

After all that varroa nastiness, here are some lovelier pictures of solitary bees and bumbles happily not worried about mites.

A little bumble bee John found in the morning that hitched a ride. Morgan Bowers, who comments below, says. ‘Your ‘little bumble bee’ is Andrena fulva, the Tawny Mining Bee.’

A solitary bee flies home. They are brilliant carpenters and make little homes for themselves.

David has made a bee tower for the solitary bees at Roots and Shoots. These bees may be Osmia rufa, Red Mason Bee – thanks, Morgan! 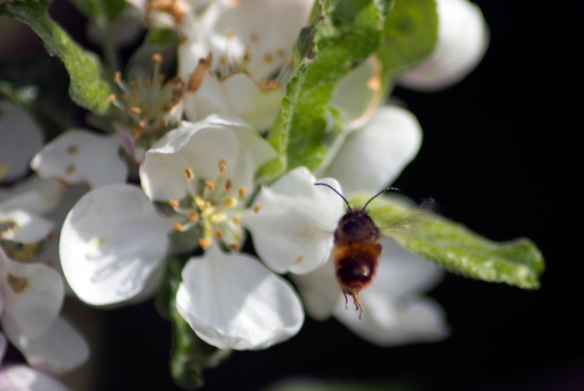 A bee hurries off to get the last nectar of the day. She has no time to stop for photos and passes like a blur!

Related posts
Disappearing bees – countdown to catastrophe or one to watch?

19 thoughts on “Bee Health Day at the London Beekeepers Association”