‘What is a swarm cell and what is a supersedure cell?’ is a question I am often asked by beginner beekeepers at the apiary. Simply put: they are both queen cells but they can be built by the bees for different reasons – to swarm away from the colony or to supersede (replace) the queen.

There are general guidelines to help identify swarm cells from supersedure cells, including:

This is not an exhaustive list and the bees don’t always follow the books. Last week Emily and I found queen cells in Rose’s hive that we took down because, after carrying out checks, we couldn’t determine whether these were swarm or supersedure cells.The colony is small, with plenty of room for the queen to lay, so there was no need to swarm; that said, small colonies are known to swarm and when it isn’t advantageous for them to do so. 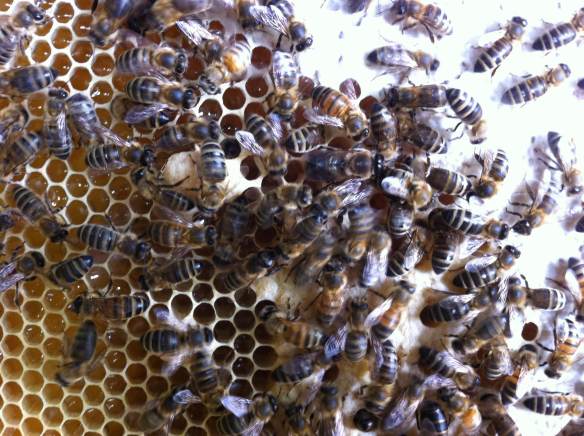 This week we found ’emergency’ queen cells built in the middle of a frame (above), which made it clearer that the bees were trying to supersede the current queen, Rose.

We found the queen too, and young larvae (no eggs), but the workers were moving quickly across the frame and were restless, which can be signs that the queen is failing to hold the colony together as a ‘cohesive whole’ and that the workers are not happy with her. Sometimes workers will try to replace what seems like a perfectly good well-laying queen, but this is because the bees know, or sense, something about her that beekeepers don’t.

With four colonies at Perivale apiary – one strong colony, two weaker colonies and a nuc that needs a hive – the way forward seemed clear. Her workers were trying to overthrow her so we should combine our two weaker colonies – Rose’s hive and, the newly named, Queen Chamomile’s hive – which would give us a second strong hive and provide a spare hive for Chili’s colony.

However, the way did not go to plan.

We had successfully checked Queen Chamomile’s hive, and found and marked the queen (a bright yellow dot as I didn’t have this year’s red pen), and had inspected Rose’s colony and caged the queen (you can just see her inside the cage below) so we knew where she was and could remove her when we needed to. When combining hives there should be only one queen to unite the two colonies.

We were going to give Rose, and the frame with the emergency queen cells, to another beekeeper at the apiary who has a queenless colony. Rose may not be a very good queen and the queens who emerge from the emergency cells may also not be very good, but we could at least give them a second chance to prove themselves with another colony.

Unfortunately as we moved Rose’s brood box over the queen somehow escaped from her cage and the operation had to be abandoned; it was unlikely we would find her again after having been caged once that day and we couldn’t risk combining the hives while both queens were present. The hives had been open a while and the bees were irritated from the manipulations, so we put everything back as it was with the help of Jonesy and a beginner beekeeper. For now queens Rose, Chamomile and Chili would have to wait. At least we had reached a decision about what to do.

Emily went for a well-deserved cup of tea and I had to scoot off, but we are revisiting the bees on Monday evening to try it all again. In some ways this is better; I am finding that with four colonies and a lot of beekeepers, and beginners, at the apiary each week that it is a challenge to make our own decisions about our hives (when, being beekeepers, everyone else has a different opinion about what to do) and to carry them out. It is my fourth year as a beekeeper and it may be that next year I will be ready to spread my wings and leave the apiary completely.

Any bee-loving vicars or gardeners in Northolt who have a spare patch of earth to share with a beekeeper and her bees?

Do visit Emily’s blog to find out how good was the tea and cake, and if anything happened next.

32 thoughts on “What is a swarm cell and what is a supersedure cell?”