I watched our bees fly home on a mild autumn day with the treasures of their colourful forage bulging out of pollen baskets, and wondered when they would start to huddle up to survive the forecast of a long, harsh winter. I couldn’t imagine then that a colony would flourish in a place where autumn cooled to 0–3°C during the day and dropped to below zero at night.

The following week John and I flew to Reykjavik in Iceland for the first year anniversary of when we met expecting to see glaciers, waterfalls, volcanoes and, of course, the Northern Lights. We had packed thermals, knitted jumpers, hats, scarves, gloves and waterproofs to prepare for wind, rain and snow, although we soon found that the weather report changed from hour to hour and, as the locals said, ‘If you stand still for five minutes you will have all-new weather’.

We had a full itinerary to explore the eclectic city of Reykjavik and discover the strange and fantastical country of Iceland. We hoped also to find time to meet an Icelandic beekeeper, Hjalmar Jonsson, who had contacted Emily through her blog and, after hearing that John and I were visiting Iceland, had generously offered to show his hives and take us around Reykjavik. When I emailed to arrange to meet on Tuesday, he replied that we were lucky to arrive early in the week as ‘strong wind from the Northern Pole was on his way’. 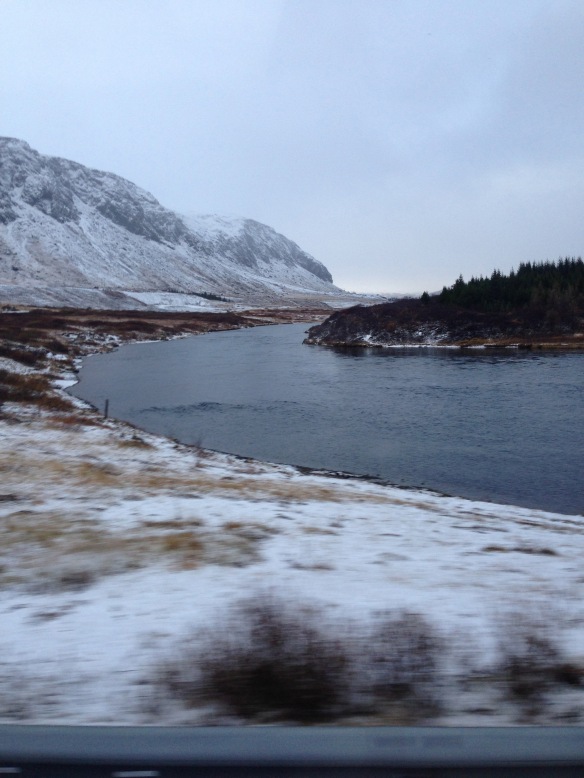 Iceland was not the first country I thought of when thinking about bees and beekeeping, but Hjalmar is part of a growing beekeeping community in Reykjavik and neighbouring towns. After meeting at the Grand Hotel, he told us a bit about beekeeping in Iceland as he drove us to see his hives. The honeybees in Iceland are Italian and usually imported from Sweden or Norway where they are bred. We were told the colonies have little or no disease or problems with varroa due to their isolation. The main challenge the bees face is not the snow and cold but wind and rain. Hjalmar uses polystyrene Langstroth hives to help keep the bees warm and we later saw that these were firmly strapped down and lined up against a wind barrier of trees and bracken.

This year the summer in Iceland was wet with prolonged spells of rain and a poor honey harvest for Hjalmar, who has two hives, and his neighbour, who has six or maybe more! But Hjalmar was content to have two strong colonies to overwinter and had even set aside two jars of honey for myself and Emily. A very valuable and generous gift!

The day was full of cold bright sunshine with a sharp bite in the air as we walked along the path to take our first view of Icelandic bees. We could have been looking at a row of hives in London, it was all so familiar. We took a few photos and Hjalmar said ‘Now let’s take a closer look.’ 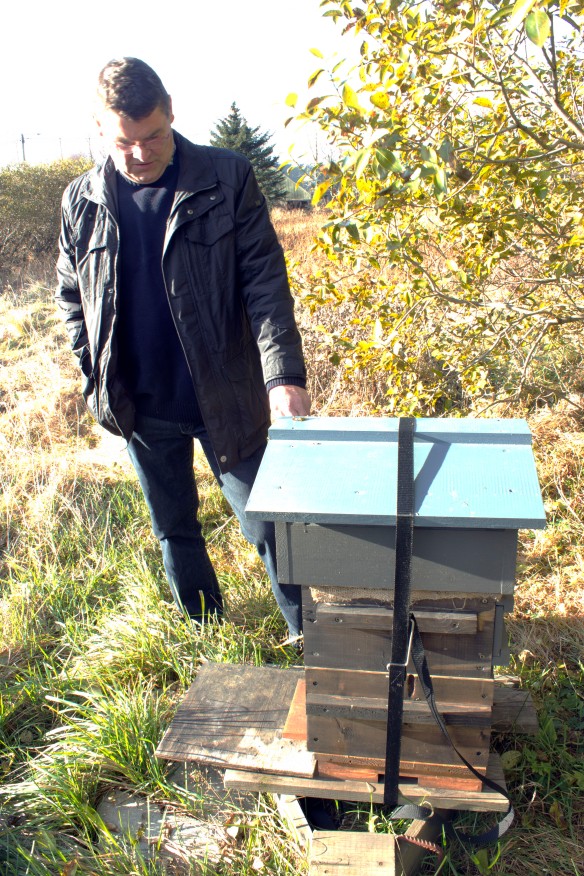 A deserted Warre hive stood empty to the side and in which Hjalmar said the bees had only built two boxes before giving up. He thought the Warre hive might not have been warm enough to keep the colonies going. There was an observation panel at the back revealing the beautiful emptied nest of natural honeycomb inside. I thought how much fun it would be to observe the hives this way in winter, although our bees would likely propolise the window to stop us from being nosy.

Natural honeycomb built by bees inside a Warre hive.

We walked back towards the Langstroth hives where Hjalmar pointed to a piece of honeycomb lying outside the entrance, he thought it was drone comb. ‘This is when it is hard for us males, John,’ he said. ‘To see when we are no longer needed by nature.’ He was referring, of course, to the end of summer when the males (drones) are evicted from the nest by the females (workers) – a gripe of many male beekeepers. I sensed bonding was occurring.

Unconcerned by the fate of their brothers, a few workers were flying in and out of the entrance, perhaps on cleansing flights or to stretch their wings on a clear day. I asked Hjalmar if his bees were good natured and he nodded, ‘Except one time when I opened the hive too early in the year. They weren’t ready for me’.

Leaving the bees to enjoy their winter break, we took a stroll along the path to a salmon river – an oasis of calm outside the city populated by dog walkers, ramblers, birds, and salmon. Birdwatching is another passion of Hjalmar’s along with a growing interest in photography and blogging. And he was very pleased to show us the untouched beauty of his country as we drove to see a vast mirror-like lake – Iceland is a land of incredible natural beauty. 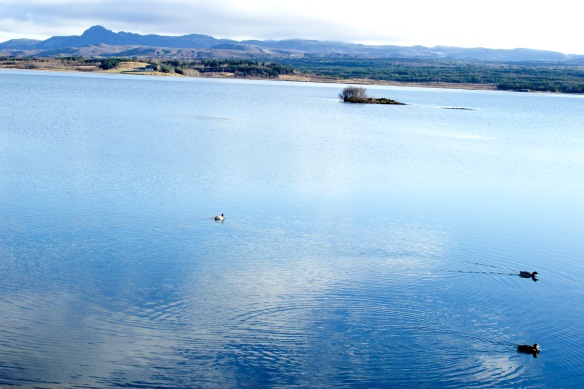 Another surprise was waiting – a visit to a farm in the suburbs where the farmer has been keeping bees and growing apple trees, which, like many trees, are scarce in Iceland.

We were warmly greeted by the farmer’s daughter who was keen to show her father’s hives. ‘We make mistakes and we are learning all the time.’ They were learning fast and their happy, healthy bees suggested they didn’t make many mistakes. Two rows of Langstroth hives were situated under a wind shelter with bees contentedly floating around jars of sugar syrup warming in the sun outside the entrances. 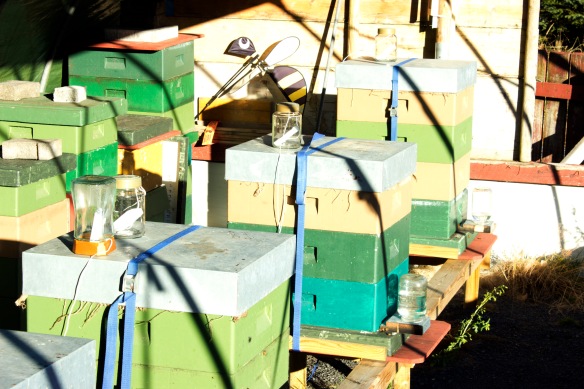 There were even thermostats on the roofs, so while we were shivering in 2–3°C outside, I could see that the bees were a snug 22°C inside. 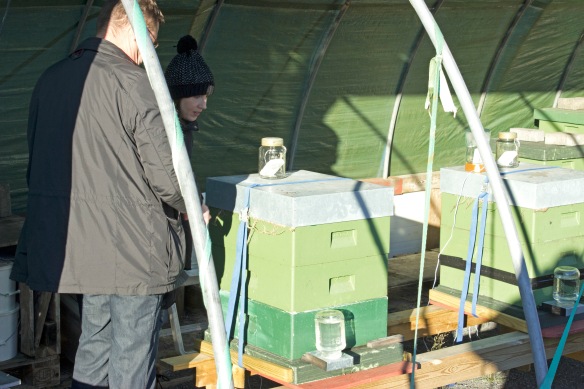 Having grown up on a farm in Hereford, John was keen to look around and we were treated to more Icelandic hospitality with a tour of the greenhouse apple orchard and egg factory. We even left with organic apples in our pockets to eat later.

Iceland is a relaxed country to put it mildly, and Icelanders have a quiet, dry humour that I was only just beginning to appreciate. So when Hjalmar told us we were going to see the president of Iceland, I thought he was joking. He was, sort of.

It is possible to drive up to the President of Iceland’s house, which is white, in Bessastaðir, Álftanes, a town in Reykjavík. The residence is surrounded by mountains and sea and overlooks a view of the city. President Ólafur Ragnar Grímsson and his very popular First Lady Dorrit Moussaieffare are said to sometimes enjoy strolls with visitors in the grounds. You can read more about it on this blogger’s visit. Amazing. It gave me a real sense of the closeness and ease of the Icelandic community, which I liked very much.

I took this one. Behind the church is the house of Ólafur Ragnar Grímsson, the President of Iceland, in Bessastaðir, Álftanes, a town in Reykjavík.

After all that bee-ing and sightseeing, it was time for a trip to the oldest coffee house in Reykjavik. If you ever visit, you must go there. Mokka-Kaffi opened in 1958 from its beginnings as a place for artists to meet and today is famous for its hot chocolate. Hjalmar nodded towards a man sitting by the window sketching into a notebook.

As our day was drawing to an end, Hjalmar drove us to the harbour ‘and to take photos’. Hjalmar is practising photography for his blog, which I hope to post a link on these pages soon. The city looked even more picturesque from the other side of the harbour with the sea sparkling across the bay.

My lovely boyfriend John and official photographer for the day!

John and I had been overwhelmed by the Icelandic hospitality and generosity we had received that day and as Hjalmar dropped us off at the Aurora Borealis museum, I said that we hoped to see him in London next year to visit our hives.

We have kept in touch since and as Hjalmar said, we were very lucky with our visit to Iceland. This was only part one of our holiday, part two including bubbling hot springs, rumbling mountains, waterfalls and glaciers was yet to come…

I suspect the farm Hjalmar took us to visit was the same as featured in BeeCraft magazine: ‘Beekeeping in the land of fire and ice’.

You can read more about Icelandic beekeeping on the association website.

31 thoughts on “Beekeeping in Iceland”