‘Bee Shelter’ pointed the road sign with a pictogram of a church, leading tantalisingly off the motorway. I had seen the sign every time we drove through Gloucestershire to Hereford, and this time sighed ‘I wish we could see the Bee Shelter’. The van slowed and turned into a slip road. ‘Where are we going?’ I asked. John replied ‘To find the Bee Shelter.’

It didn’t take us long to find the church of St Mary the Virgin at Hartpury, home to the Bee Shelter, and to learn there was a centuries-old tradition of beekeeping in these parts.

John parked outside and we got out to look around. There was no one else here other than sheep grazing in fields, birds warbling in trees, and bees humming in the air.

A sign outside the church told us that the Bee Shelter at Hartpury was rescued, repaired and rebuilt inside the church. John was intrigued and I was excited, so we pulled open the gate and went inside. St Mary’s is like a little window in time, we were both struck by its beauty and serenity. We walked along the winding path and past the source of humming – a cloud of busy dark-coloured insects so small and fast, I thought they were flies.

There was a long stone structure up ahead that looked promising and my excitement grew as we approached. Two familiar-looking straw baskets were housed within – bee skeps! This was the Bee Shelter of Hartpury.

John stopped beneath the blossom tree to take pictures, while I ran my hands over the skeps and imagined what they must have felt and sounded like when bees lived inside. 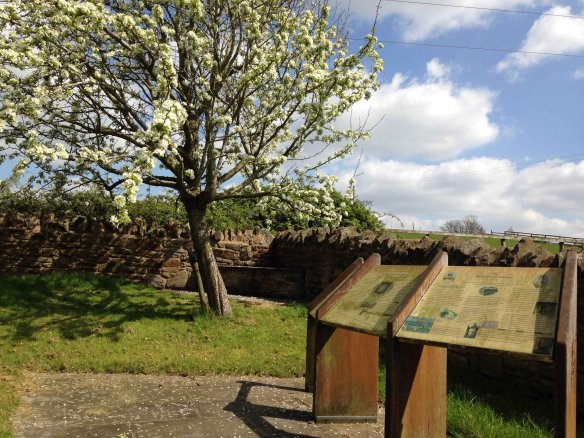 Here we found out more about the Bee Shelter and of beekeeping at Hartpury. The Bee Shelter is described by the International Bee Research Association as “an unique historic monument” – in fact, there are no similar structures known anywhere else in the world.

It was built in the mid-19th century by Paul Tuffley, stone mason, quarry master and beekeeper, using Cotswold stone. His exact intent is not known, but one theory suggests the Bee Shelter was for his ornamental garden in Nailsworth, Gloucestershire. The structure showcases the skill of his stone masonry with gabled wall plinths, Doric columns and a ridge-crest roof. In 1852, the Bee Shelter was threatened with destruction after Tuffley’s house was repossessed by his mortgage. “It was saved by volunteers from the Gloucestershire Beekeeping Association, who dismantled it and, with the encouragement of the Principal of Hartpury Agricultural College, reassembled in the College grounds.” By the end of the 19th century, the ornamental stonework had begun to erode and the structure was saved for a second time by the Hartpury Historic Land and Buildings Trust. Restored, the Bee Shelter now “rests in peace” at St Mary’s, where it faces in the same direction (north) as its original home at Nailsworth. 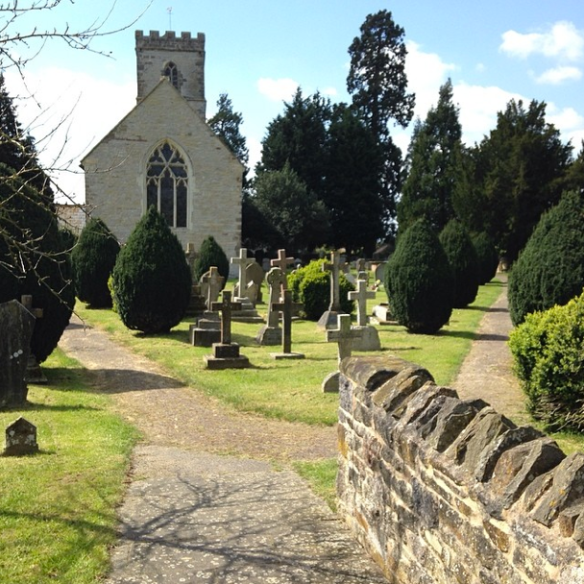 There is long tradition of beekeeping in Hartpury: “The Domesday Book states that Gloucester annually paid 12 sesters (23lbs) of honey to King Edward, and in 1260 it is recorded that tenants from the manor of Hartpury, owned by Gloucester Abbey, held land in return for payments of honey”. Honey and beeswax too have a close connection with the church. In ancient times, it was believed honey had a heavenly origin.

I was particularly interested to find out more about the skeps used by beekeepers before the invention of the modern hive. They were traditionally made of wicker or straw and housed a smaller colony of bees than today’s wooden hives. “Contrary to current practice, a skep beekeeper encouraged swarming. He looked for swarms leaving his skeps, caught any he could and put these in an empty skep. By the end of the summer he might have two or three times as many occupied skeps as in the spring. The honey was harvested by destroying, usually over burning sulphur, a number of the colonies in the autumn, when the nectar flow diminished. These would generally have been the heaviest colonies and also any small ones than might not survive the winter. The intermediate colonies were overwintered in their skeps.”

By this time we were really running late for arriving at John’s family farm in Hereford. So we reluctantly left this peaceful place to go back to the van.

On our way out I stopped to look more closely at the strangely humming flies and suddenly realised they were bees! Hundreds of hundreds of tiny fuzzy black bees darting in and out of small bored holes in the ground. They moved too fast to get a good look or picture, though John got this short video:

What are these ground-dwelling and friendly bees, I wonder, masons, carpenters? They didn’t seem bothered by our curiosity – the mystery bees of Hartpury.

That was Good Friday at the start of our Easter weekend, and there was another surprise in store… 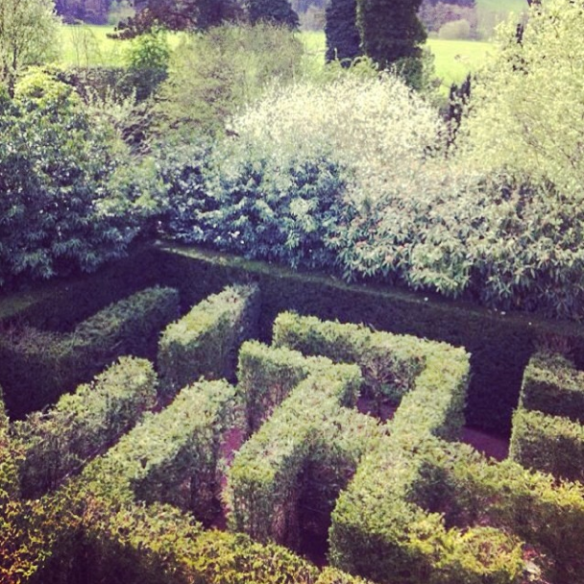 On Bank Holiday Monday, John took me to the real Hampton Court in Hereford, to explore the pretty gardens and lose our way in the maze. We split up to see who would solve the maze first. I did, and then climbed the tower at the centre to wave John over. The view at the top was amazing, but there was something secret beneath.

Climbing down the narrow stone spiral staircase, we went into a long dark tunnel and emerged in a pocket of bright sunlight to find a beautiful secret garden beneath the maze and behind a waterfall… 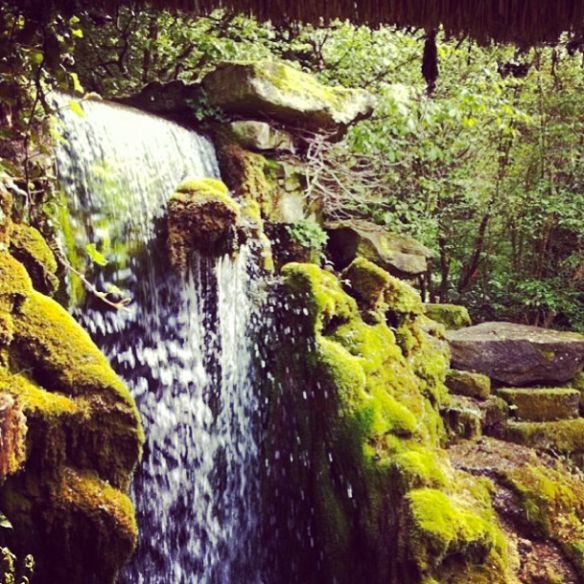 This was like magic! We had so much fun discovering sunken paths, hidden flower beds and stepping stones across overgrown brooks… 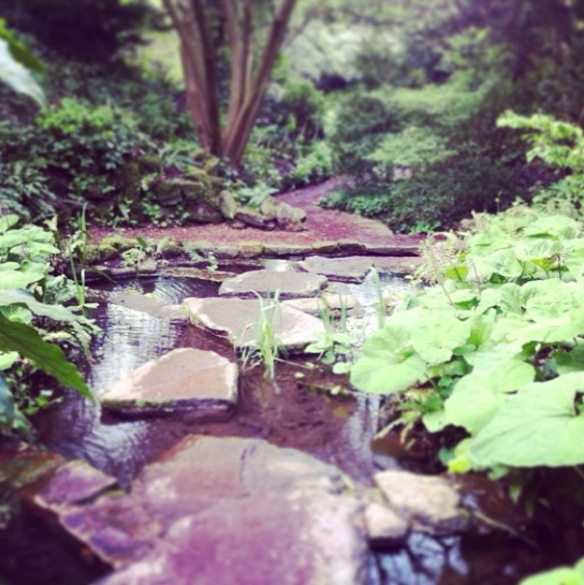 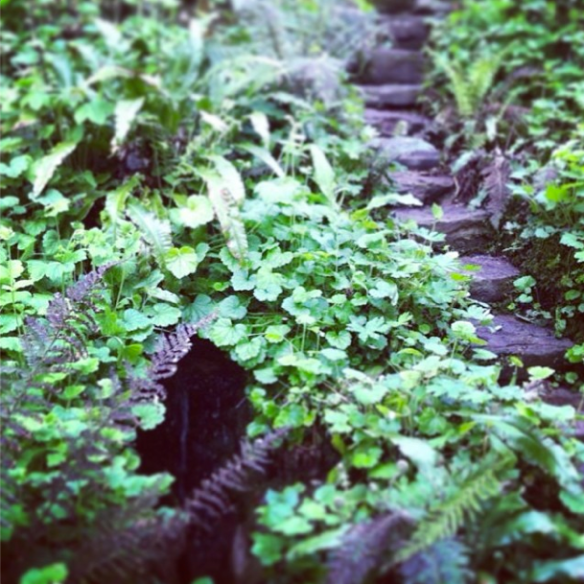 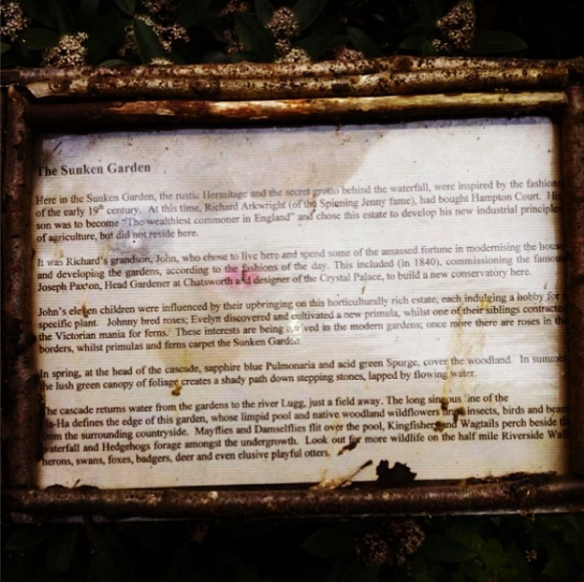 What of our hives this spring? Visits continue to keep check of syrup and insulation in the roof (late April was chilly) and of early queen cells (unlike skep beekeepers, we don’t encourage swarming), but the bees must wait in May, which is the month of hen parties and weddings of beekeepers and beekeepers’ daughters. For now, here’s a happy honeybee foraging nectar and pollen off the cherry blossoms on the farm in Hereford. 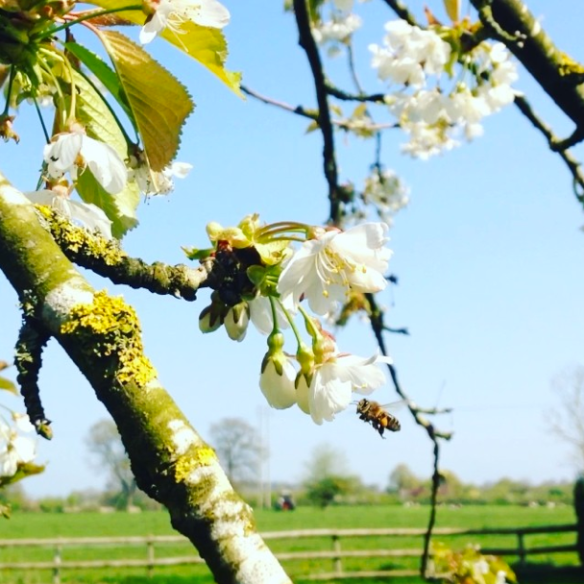