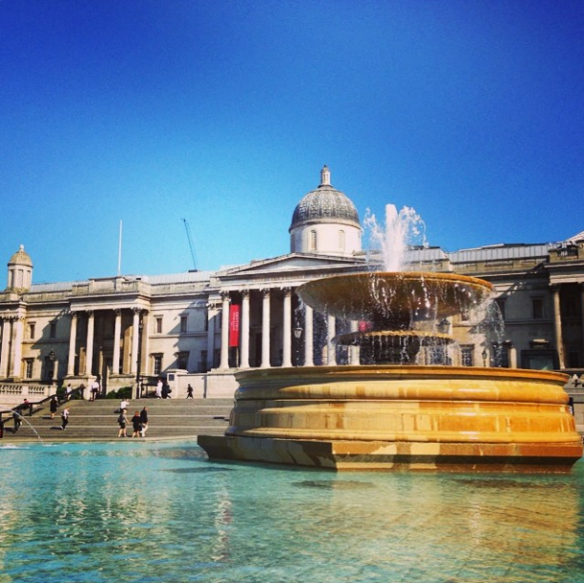 So England has lost and is out of the World Cup. There is still a promising summer ahead and today was a beautiful day for beekeeping with blue skies and sunshine.

Festivals were taking place all over London from Hanwell to Greenwich, but I was more interested in celebrating bees and honey in Perivale. Last Saturday Emily and I had put a super on top of Myrtle’s hive and today we would see what the bees had done with it. 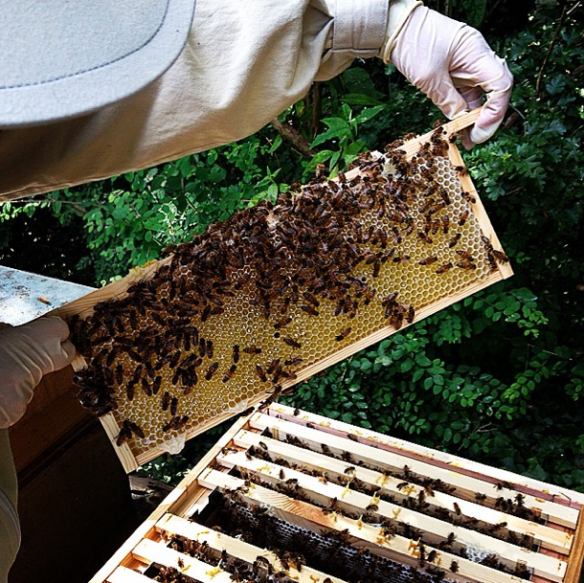 Beautiful drawn honeycomb on every frame glistening with honey ready to be capped. We couldn’t help but spend a few minutes admiring it. Honey. That Myrtle’s colony has moved so quickly to fill up a super shows they had really needed the space. We lifted the super to one side and covered with the crownboard to keep the bees warm and protected from robbers.

Myrtle’s bees had been caught playing with the idea of building queen cells last week, although there were no larvae inside the cells. I read in Ted Hooper that removal of two-year-old queens should take place in late August to early September, because of the advantages of having a young queen for wintering. She is less likely to die or become a drone layer, and she keeps the brood nest active for longer in the season, which means younger workers do not have to live as long in winter conditions. (Guide to Bees and Honey, Ted Hooper.) Emily and I have never removed a queen unless it was necessary for the colony’s survival, such as a drone layer, and we’ve never bought a replacement queen, preferring the bees to make their own and decide when to do so. That’s worked out, so far. I have a feeling that the bees might supersede Myrtle in August without our interference. We’ll wait and see.

The queen in question was spotted during the hive inspection. “Look how calmly and slowly she walks,” said a beginner. Myrtle is our loveliest queen, regal and elegant with a skip of playfulness. I adore her. We saw more drone cells in the middle of the frame rather than the edges, which can be another sign of an ageing queen. Oh, Myrtle.

Jonesy lifted the super back on the hive and we put a second super on top. The lime is out and the bees will be flying. “You might need supers on all your hives,” said Jonesy. Hopeful. Though the two hives that were split into four on 11th May must build their brood to full strength. The colony of Chili’s daughter is on its way with plenty of brood and stores. However, the colony of Chamomile’s daughter shows signs of a failed queen. When Emily had spotted cells containing two eggs last week, we gave the new queen the benefit of the doubt and more time to get used to her egg-laying duties. Today we saw much more drone comb, fewer worker brood and young larvae, and no sign of the queen. I suggested a frame of eggs from another hive to test whether the she was still in there – if not, then the bees would build another queen cell – but as usual the workers were one step ahead of us. On the second-to-last frame we found a queen cell. Inside there was a pearly white larva coiled on a bed of royal jelly.

This was the first time in five years that I have seen a queen larva curled in her cell waiting to be sealed. I was tempted to take a picture, but conscious that the future of this colony is perilous and that queen larva in their cells are easily damaged. Returning the frame to the hive with care, we had two choices. The first to take down the queen cell and unite the, probably, queenless colony with its mother colony, Chamomile’s, to make one stronger hive with a laying queen. The second was to give the bees a chance to make their queen and become an established colony in their own right. We chose the latter, but their chances aren’t good. It is six weeks’ since the colonies were split and waiting for a new queen to emerge and mate will set back this colony another few weeks. As workers get older they become less able to nurse and raise brood. Nurse bees are usually between 5 to 10 days old and eat a lot of pollen for their glands to produce royal jelly and brood food. We don’t know how many workers in this hive are still nursers, but we may have to revisit our decision if the situation deteriorates and unite colonies for the wellbeing of the bees.

Chili’s colony is starting to fill the brood nest, although not with the same gusto that her bees had at the start of the season and before the split. Her bees were testy today. The same was true of Chamomile’s hive, except that our feistiest queen was in a fairer mood and her bees were behaving nicely. Having five hives to inspect is like going through every temperament of bee in an afternoon. You can see Chamomile in the picture above getting a licking from her workers as she walks across the frame. Her pheromones are being spread throughout the colony as her workers lick her and then each other, telling the entire court that the queen is present and well, and to do her bidding.

Today we left the apiary with our dreams of honey coming true, and thoughts of the first taste of Myrtle’s honey to come…

I taste its juice; sweet gods of the evergreen
woods’ taste;
crushed music, bars and epiphanies of dripping air;
aggregated cells
of each and every flower’s oddness there;

12 thoughts on “The month of honey”