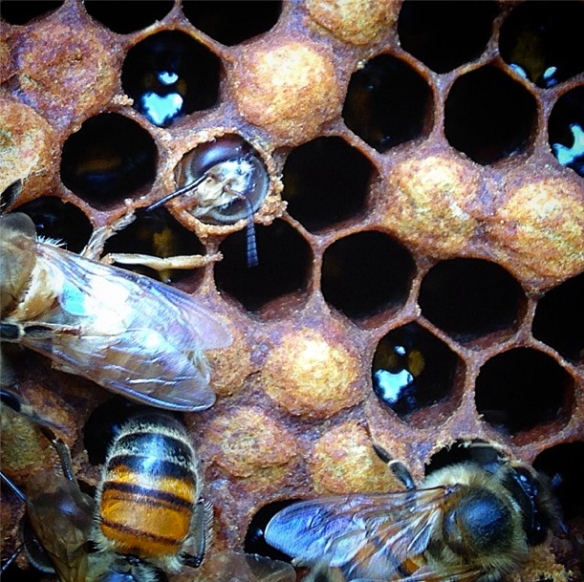 A bee was born last Sunday afternoon along with a few hundred others in his small queenless hive. The drone chewed away the wax capping of his cell and emerged from a frame as Emily held it up to inspect for signs of a queen. He would have blinked at us, if he could.

The new queen had been missing since she was first spotted at the end of May. She had looked long and beautiful after her mating flight, full of promise for her colony. A couple of weeks later something had gone wrong. Emily found cells that had two eggs laid in them, usually a sign of a laying worker or sometimes a new queen getting used to her duties. We gave the queen the benefit of the doubt but the following weekend we found a queen cell with a small pearly larva coiled on a bed of royal jelly. The workers were trying to make a new mother and the unnamed beauty was nowhere to be seen. Two weeks later their attempts appeared to have failed and Emily and I decided to unite the hive with its original colony, Chamomile’s.

We met two weeks ago on Sunday at midday to go through the queenless hive using a method that John Chapple had taught us to make sure there is no queen or virgin hiding away. We took out each brood frame, inspecting in turn, and placed them in spaced-out pairs in an empty brood box to the side. If we did miss a queen on a frame then the bees would betray her by gathering around the frame she was on. We didn’t find her, but we saw emerging drones, drone brood and multiple eggs in cells. I saw a varroa on a worker, when looking through photos on my way home, this was not a healthy happy hive. 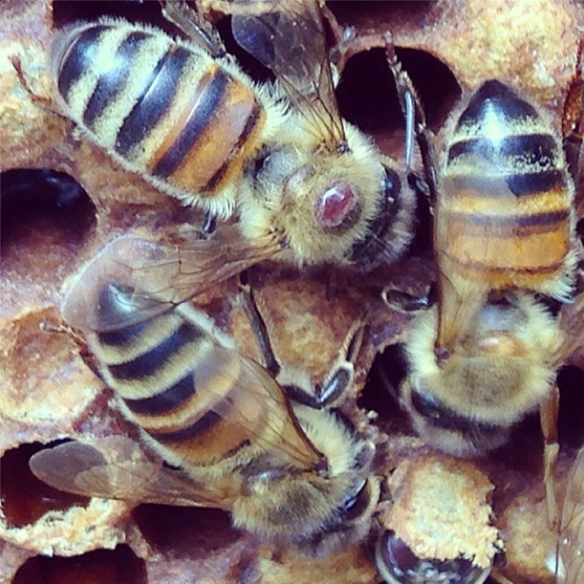 Emily had inspected Chamomile’s colony the day before and all seemed well. We removed the queen excluder from Chamomile’s hive (the queen-right hive) and placed sheets of newspaper on top of the brood box making small slits with our hive tools. We then placed the brood box of the queen-less hive above. The bees will chew away the newspaper as they become accustomed to each other’s smell and unite as one colony. That is, if Chamomile accepts the return of her prodigal daughters, and sons. We put on the roof and hoped for the best.

That was two weekends ago. This Saturday came with surprise sunshine instead of expected rain. The bees were on the wing and making honey. Emily and I arrived at the apiary for midday inspections ahead of Andy’s 60th birthday party that afternoon. It was hot work going through four hives in a mini heatwave, but wonderful to see our colonies bursting with bees and heavy frames of honey. 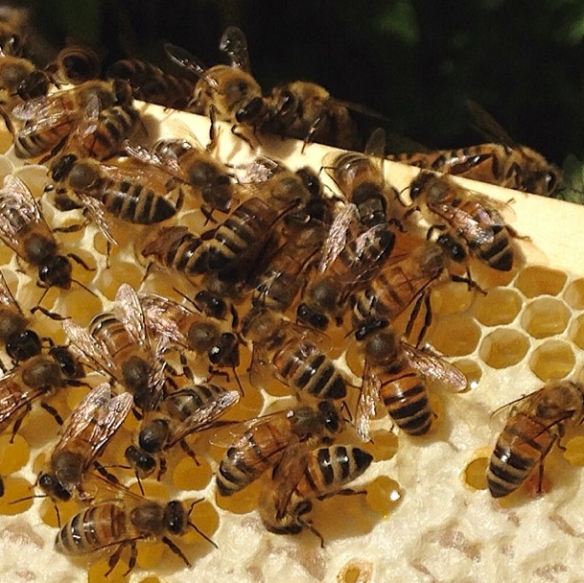 Chili’s colony had made a good start on a super that Emily had put on last Saturday. Chili is a slender bright orange-red queen like a tiny beautiful chili pepper. Her temperament pervades a hive of energetic and lively, but steady bees. We soon spotted her walking over the top and down a frame, and caged the queen to keep her safe during the inspection. We saw some queen cups and a cell that could have been a long drone or a queen, but these were too few to be attempts at swarming and were probably late summer plans of supersedure or workers playing as they do. I released Chili from her cage and she climbed onto my glove for a mini adventure before dropping into the hive.

The split hive from Chili’s colony is coming along nicely, although they haven’t made much work of their super. We saw the new queen, Chili’s daughter, who looks just like her mother. I had a name for her on the tip of my tongue, but couldn’t quite think of it.

Myrtle, our favourite queen and matriarch of our longest-standing hive, has given us two magnificent supers of honey this year and I’m really proud of the lovely queen and her bees. Myrtle’s gentle workers were noticeably more alert – not quite feisty but they have lots of honey to guard now.

We didn’t see Myrtle but there were eggs in cells so a queen is there. Earlier in June we found a couple of queen cells in Myrtle’s hive which led us to suspect the workers might try to supersede their two-and-a-half year old queen this summer. Perhaps mother and daughter are inside the hive now, tolerating each other until the workers decide the old queen’s time is done.

Last we opened Chamomile’s hive to see whether the bees had happily united. We went through the first brood box holding our breaths, it is always a test of nerves to find out if a hive combining has worked. There were eggs – single eggs – in cells of the former queen-less brood box which meant Chamomile had been upstairs and started to lay. The bees had chewed away most of the newspaper and were co-living contentedly. Chamomile was found in the bottom brood box along with a couple of queen cells that might again be signs of supersedure. Will we have all new queens to take our hives into winter?

That done, we changed out of hot beekeeper suits and went to Andy’s 60th birthday party where more bees awaited – chocolate raisin bees. 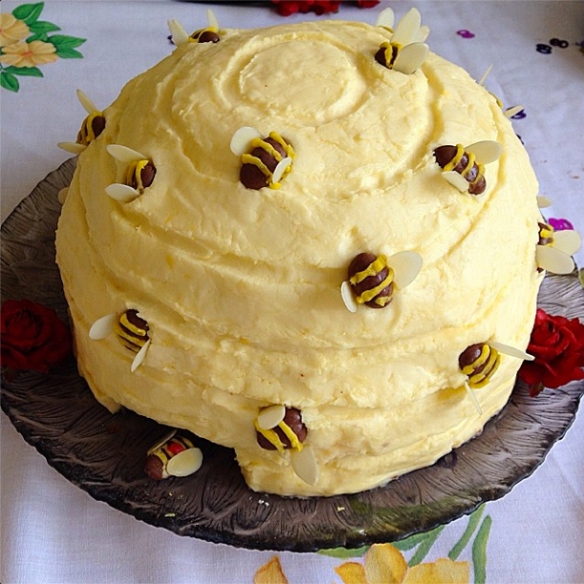 This delicious-looking honeybee birthday cake was baked by Andy’s clever wife Penny Pedley. The beekeepers at the party noticed that the queen sitting outside the hive entrance was marked with a red spot rather than a green spot for this year. “That makes the queen around 53, not quite 60,” said Andy wryly as he cut the cake. Penny had made the sponge using honey from Andy’s hive and so the cake was a birthday present from his bees too.

As this was a beekeeper’s birthday there was, of course, a beer hive…

… for beekeepers to enjoy a long cool dark beer after a hot day’s beekeeping.

Emily and I chatted to John Chapple about our bees while eating the buffet and cake. He asked about the ratio of brood, bees and honey in the hives, and we reported that all hives were producing less brood. “The bees are telling us that summer is coming to an end,” said John. But not quite yet. 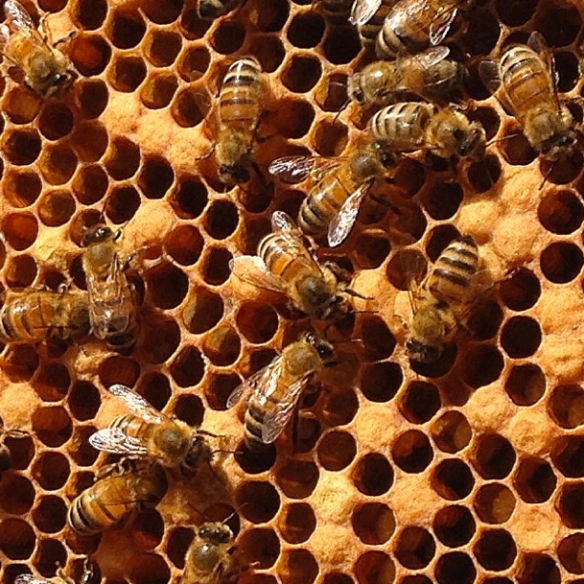 The name for the new queen, Chili’s daughter, sprung into my mind as we sat in Andy’s pretty garden. Emily and I have a tradition of naming the queens of the hives we share after essential oils, so I asked Emily if she liked Pepper for black pepper essential oil. She did.

Black pepper (Piper nigrum) is a dark, intense and interesting aroma. In subtle aromatherapy the essence “will help us ‘get a move on’ at times when our lives feel ‘stuck'” (The Complete Guide to Aromatherapy, Salvatore Battaglia). Perfect for a late spring queen who needs her colony to get a move on before autumn.

26 thoughts on “A birthday for a bee and a beekeeper”