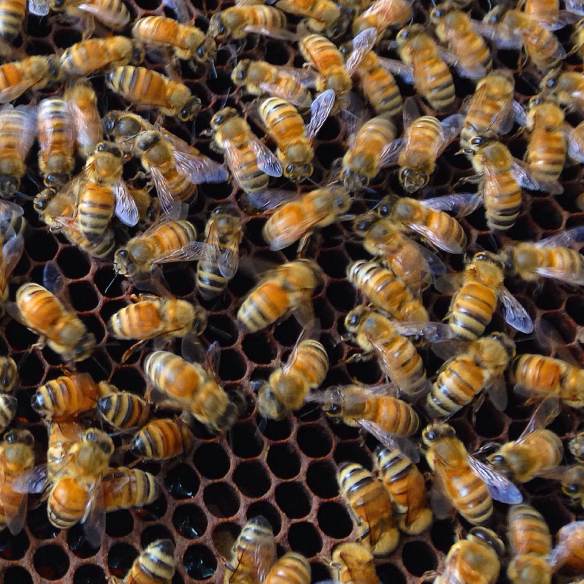 Jonsey had been stung twice by the time I arrived at the apiary. “I put my head around the net and they got me,” he said, pulling on his suit. It was a hot and humid Sunday. We were taking off the honey, although the muggy air was the more likely reason for the bees’ defensive behaviour. Jonsey was helping out while Emily was away.

I had put a clearer board underneath a super in Myrtle’s hive on Saturday afternoon. A clearer board has one or two ‘escapes’ that let bees go down but not back up, so ‘clearing’ the super of bees. I took off the roof and saw that the clearer board had done the job. Jonsey carried the super to the apiary table where we brushed off stragglers and wrapped the box in plastic to prevent more bees, or wasps, from flying inside.

That was two weeks’ ago. Since then Emily and I have taken off a second super, both are sitting in my dad’s kitchen ready to spin the honey.

So what about the bees? Our favourite hive may be queenless. Myrtle mysteriously disappeared a month ago with strangely squashed queen cells found inside the hive. The workers are behaving calmly, not erratic like a queenless colony, but there is no sign of a new queen, eggs or much brood. We put a second test frame of eggs from Chili’s colony into the hive to see if the workers try to make queen cells.

Emily inspected Pepper’s hive and reported all was well, though the queen was in hiding. Queens Chili and Chamomile did make an appearance. Can you spot Chili in her queen cage? She has a pink crown.

Chamomile was hiding in a crevice underneath the comb where we couldn’t cage her. A few bees were crawling around with shrivelled wings, a sign of deformed wing virus (DWV) which can be transmitted to queens when they mate with infected drones. We also saw black shiny hairless bees who may have chronic bee paralysis virus (CBPV), which is thought to be transmitted by varroa. Soon we’ll be starting varroa treatments on the hives.

So that’s where we left our bees at the weekend with the honey harvested and the queens still keeping us guessing. Jonsey observed drones cowering in the corners of frames. The season is nearly over and they know what is to come…

Here’s a big beefy drone who fell in love with me. He sat on my yellow gloves during a recent inspection, fluttering his wings. I felt like a queen bee.

15 thoughts on “A flurry of honey”