As February is around the corner, there’s a chance for new beekeepers to visit the apiary ahead of the beginners’ course. This year’s cohort are keener than ever to look inside the hive, but the recent cold snap has meant roofs are just briefly lifted to check the fondant.

Last Saturday I took out the varroa monitoring boards beneath the mesh floors to count the mite drop for the week. Andy Pedley used this as an opportunity to give the beginner beekeepers a lesson in what you can learn under the hive. 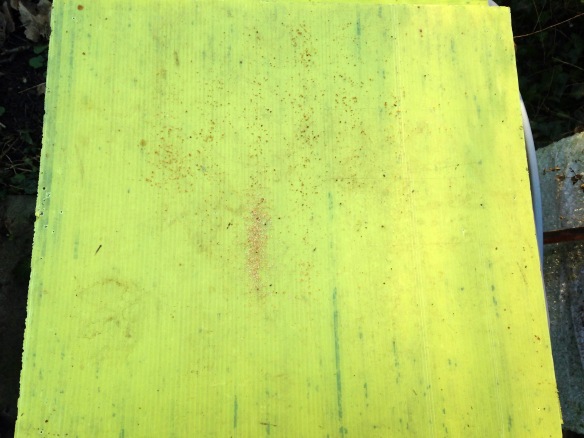 You can tell a lot about the colony in winter by looking at the varroa board, including its size, position, and activity. I held up Pepper’s varroa board (above) as Andy examined the ‘evidence’ like a crime scene investigator. “You’ve probably got around six seams of bees filling the brood box,” he said pointing to six ‘lines’ of debris that had fallen down from the brood frames. There was a pile of wax cappings: “The bees have been eating their honey stores in this spot here…”. We also counted 19 mites had dropped onto the varroa board in a week, which is not too high.

Next we looked at Melissa’s, Chili’s and Chamomile’s varroa boards. What can you tell about life inside these hives from the boards below? I’ve marked up Pepper’s board to make it easier to spot the clues.

Unfortunately, Melissa’s and Chili’s bees had around 30 mites dropped in a week, which might be more of a concern. There’s not much we can do about that now, but regularly monitoring varroa levels over winter may give us a better idea of what to do in spring.

We’ll put a varroa monitoring board under the hives again for one week in February.

The varroa boards are all yellow and it’s much easier to spot a red varroa mite against a yellow background. I don’t know if this is the reason that varroa boards are yellow, although I read a really interesting article on entomologist Simon Leather’s blog: Entomological classics – The Moericke (Yellow) Pan Trap. The post explains why many entomologists use yellow pan traps because the colour yellow “is highly attractive to many flying insects”. Varroa aren’t insects and don’t fly, but I found it interesting that varroa boards and pan traps are both yellow all the same.

Today the crowd disappeared even quicker than last week, Emily and I used the opportunity to clean up our kit boxes.

The apiary’s snowdrops are still peeking shyly from bright green shoots. The cold weather hasn’t quite coaxed them to unfold their pretty flowers. Instead, I’ve drawn what they might look like in a couple of weeks visited by a bee.

29 thoughts on “Winter studies: Lessons under the hive”