Autumn and winter are good times of the year for consolidation. The beekeeper can take stock of the hives and colonies, clear up apiaries, clean up equipment, disturb a few spiders, and plan ahead for the next season.

The ebb and flow of the seasons are not constant, however, and the points on the beekeeping calendar can move each year. The autumn syrup may be poured a month earlier in August for late summer rains. The mouseguard might be pinned to the entrance a month later in November for the workers still bringing home baskets of pollen. Wasps may be seen gliding around the creepers beside the hive, and drones found sitting on the roof as late as December.

This sometimes makes the question “What does a beekeeper do in winter?” a difficult one to answer.  This is because a beekeepers’ checklist is only a guide to the beekeeping year and not a set of rules.

My step-nephew Sam films what beekeepers do in winter at the apiary, while Andy Pedley tells a visitor what the bees do in winter.

Emily put on the mouseguards at the hive entrances when she noticed that fewer bees were carrying home pollen. The hives were wrapped around in chicken wire as a precaution against possible woodpeckers watching from the bare branches overhead. We tackled the task of removing the syrup from Peppermint’s hive and replacing the feed with fondant, despite a crowd of protesting workers, because the days had become cold and short.

Winter also comes to London despite talk about our city’s microclimate and of bees making queens to swarm on a warm October’s day, which, of course, might happen. But if it’s true the season can sometimes be mild, overall there are fewer days when either bees or beekeepers feel like going outside. On those days both bees and humans are glad of a well-stocked cupboard, an insulated roof, and a secured entrance. 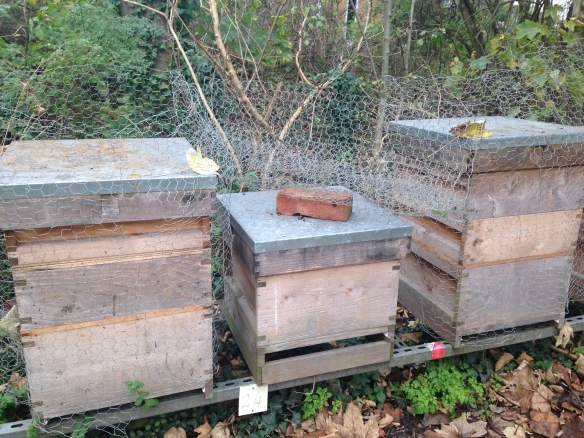 Every autumn and winter, Emily and I will ask each other “Shall I bring more syrup?”, “Have you got pins for the mouseguard?”, and “Do you think the fondant can go on?”, and each week our plans change as frequently as the weather. We both know that between the two of us the bees will be ready for winter as and when they need to be. We both watch the days and the bees, and tick off items from our checklist when it feels right to do so.

A beekeeper’s notes for November often turn to thoughts of what we have and haven’t done, none of which matters now, and then to dreams of the bees returning in spring.

7 thoughts on “A beekeeper’s notes for November”