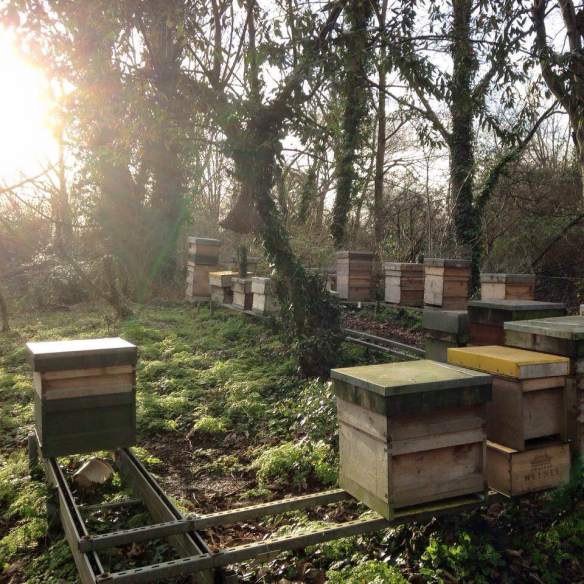 Pepper’s colony had eaten their first block of winter fondant. The hive had lost weight and it was possible to heft the boxes slightly off the stand. I stared down the hole of the crownboard into the dark abyss of empty honeycomb. There was no sign of activity. Then a single worker crawled up a wall and stopped a few inches beneath the crownboard. She stared back as I slowly lowered a new block of fondant over the hole.

The neighbouring hive belonging to Pepper’s daughter, Peppermint, had become heavier over winter. The workers seemed to have made good use of the milder days to find forage for stores. I lifted the insulation to discover a small crowd of bees had found their way under the roof. They looked like young bees judging from their soft fuzzy thoraxes and perfectly shiny folded wings. They were too busy exploring the new space to notice me. I put back the insulation and closed the roof.

Melissa’s hive had plenty of fondant under the roof and the boxes were still too heavy to heft. This is our longest-standing hive which has been carried through five winters by the same line of queens. I try not to think too much about Melissa’s hive in winter other than hope for the best in spring.

I slipped the varroa boards under the hives to monitor the mite drop for February. It was a windy and damp afternoon, the sort of day to stay at home in the dry and warm. There was little activity outside the hive entrances, although Emily and I had seen the bees flying for a few weekends in January.

Trying my best not to disturb the colonies, I quietly knelt down at the entrances to look through the mouseguards and saw light shining under the metal mesh floors. This reassured me that piles of dead bodies weren’t accumulating at the bottom of the hive and blocking the entrance for surviving workers. But to prove I wasn’t as stealthy as I thought, workers from all three hives flew out to investigate my activity. They soon settled down and perched on the chicken wire wrapped around the hive boxes. 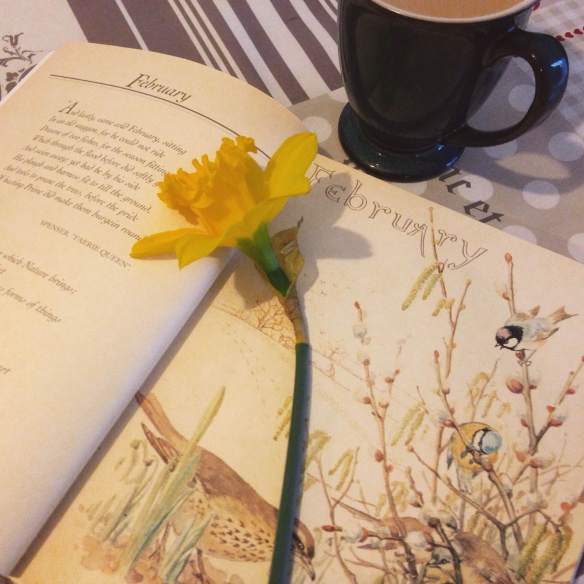 “Life can’t always be honey,” my grandmother had said in the last few days of her own incredible life. It’s true. In February the frosts aren’t quite finished even as the first crocuses and daffodils come into bloom. The two strongest colonies had plentiful stores going into winter and even the weakest had sufficient to last till early spring, but was it enough for a mild winter when the queen continued to lay and the workers continued to consume honey almost as they did in summer? On the coldest days in February the bees would need to keep warm while sending out workers to reach the fondant or remnants of honey at the furthest frames of the hive. On warmer days the workers could take advantage of the year’s early forage of hazel catkins and snowdrops to replace their stores.

Thinking of my grandmother’s words at the entrance of the hives, I whispered to the bees to persevere for a few more weeks, because it might be difficult now but a good spring is around the corner.