Ups and downs in beekeeping are about as surprising as the rain in April. After Pepper’s colony had been lost to winter in February, Emily and I delayed the comb change in March due to the cold weather and dwindling sizes of our two surviving hives.

It was a puzzle. These small colonies were just too big for a nuc and yet too weak to keep themselves warm in a regular hive. They needed something inbetween. I had bought a roll of foil insulation that you might use for insulating lofts, which I cut into squares with a pen knife and wrapped around the dummy boards and old empty brood frames to keep both nests warmer. The bees weren’t taking their syrup in the chilly weather either. I left the winter fondant under the roof with more insulation, closed up and hoped for the best.

Andy Pedley took a photo of my insulated dummy board. The other beekeepers were somewhat impressed by my use of odds and sods, at last my induction as a beekeeper was complete.

Meanwhile, regular readers of mine and Emily’s blogs will know that my hive partner has gone on maternity leave to look after a very special little drone. Congratulations to Emily and Drew on the arrival of their wonderful baby boy Thomas who you can read all about on Emily’s blog!

I haven’t told the bees yet, but here’s what they did next.

On the odd bright day in April when I opened up the hive it was like inspecting winter colonies. The bees were clustered over two or three frames with some patchy brood. They were being kept alive through warmth and food, but their situation wasn’t improving much. I managed to reduce Melissa’s colony into one box when visiting the apiary with Jonesy on a Sunday. The colony had nested in the super over winter because it was the warmest spot at the top of the hive beneath the fondant, but they had left behind a couple of frames of bees in the brood box below.

I removed the old brood box and put the super holding the nest on the floor with a new brood box and frames above shaking in the rest of the bees. The forecast was fairly warm for the week ahead and I hoped the bees would be encouraged to move onto the fresh comb, but a week later they had not touched it. It become cold and rainy again, and I abandoned the attempted Bailey comb change.

I could hardly blame the bees. When the nights dropped to 1-4•C and daytime temperatures peaked at 9-12•C, it was a lot to ask these small colonies to keep the hive warm, and draw new comb, and forage for new stores, and rear brood.

It was barely warm enough for some humans to want to go outdoors, but I managed to encourage my dad to the apiary to help clean-up some hive equipment. He enjoyed it once there. He does like to blowtorch stuff.

And seemed a bit disappointed when the job was done. 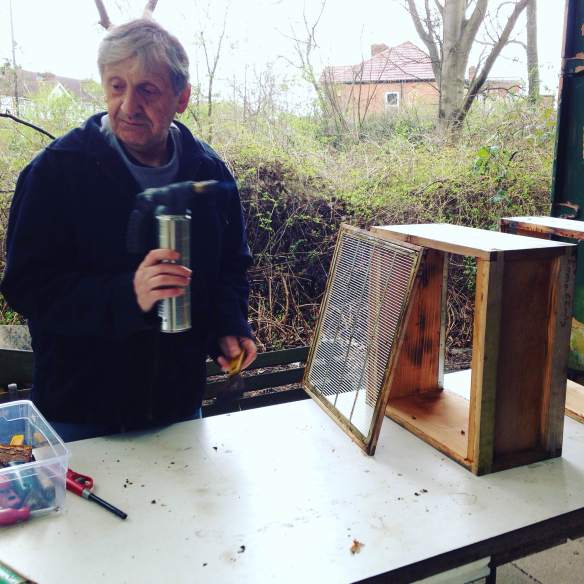 The queens hid away in April with no sight of new eggs being laid. It was only the workers bringing home pollen and calmly carrying on with their tasks inside the hives which gave me any reason to believe that the colonies were still queen-right. The brood and bees that were there were largely workers, not drones, which also gave me hope that neither the queens had become drone layers nor the workers started laying.

The queens surprised me for May Day. It was the first time this year that Melissa had been spotted as Jonesy pointed over my shoulder at the queen poking her bottom in a cell. Peppermint too was seen walking steadily across the comb and I hadn’t seen her since March.

Melissa is somewhere to be spotted in this photo taken by Jonesy, towards the right of the frame there is a faint pink dot revealing the queen. Despite my joy in seeing her, I didn’t keep her out for long. “Put her back before she gets shy,” said Jonesy. 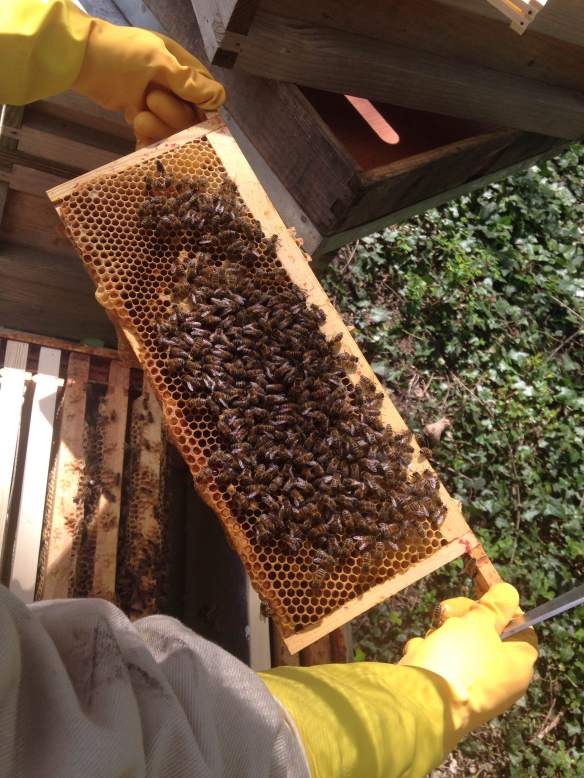 The days and nights were getting warmer. When opportunity allowed I transferred the frames of brood from both Melissa’s and Peppermint’s colonies into clean brood boxes, standing on clean floors with a clean crownboard and roof above. As the bees were still only occupying three or four frames in the nest, I filled the gaps with insulated dummy boards. I’m pretty sure that the extra insulation in our hives has been vital in keeping them alive this far.

A normal comb change wasn’t going to happen this year, the colonies just weren’t up for it. Instead, I would swop the insulated dummy boards and old brood frames for new foundation as the nests, hopefully, expanded in May and June. I feel it is going to be a year of slow progress for our bees.

Peppermint’s ladies had made quite a fuss when I moved them. I had caged the queen on the comb so I knew where she was during the transfer and her workers were not happy about that. “It would be much easier if you could just put up a sign with an arrow saying ‘This way’,” said Pat who happened to be walking past me. I agreed.

If April showers bring May flowers then I hope the bees will be as bountiful as the forage. Just to be safe, I will keep their syrup topped up and the nests insulated till both hives fully recover.

Pat kindly gave me a bottle of Hive Alive to add to the syrup. I had noticed a few spots of dysentery on the old brood boxes and thought the bees needed a tonic to boost their health.

The apiary was also starting to spring back to life with some hives small and weak like ours and others already booming with bees. John Chapple brought over some drone comb culled from a colony for varroa control. I felt sorry for the drones but good husbandry can be helpful to the overall health of the hive.

John Chapple and Alan Gibbs have been kindly caretaking some new arrivals at the apiary. These beautiful emerald hives used to belong to Alan Kime who sadly passed away, but thanks to the hard work of John and Alan his bee legacy has continued. I sometimes watch their activity at the entrance after inspecting my hives and they are very nice bees.

At home in the garden I was having more luck with mason bees than honeybees. A reward for patience came in April when I saw the first mason bee emerge from his cocoon.

Since then almost all the masons have chewed a hole through their mud-capped tubes and are busy foraging plants at the bottom of the garden. I caught this loved-up couple on a dandelion. 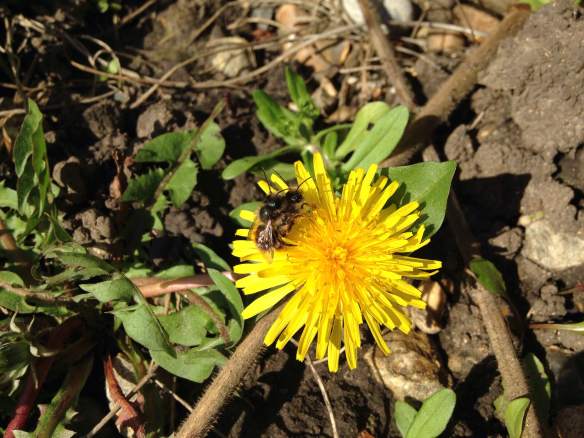 I took advantage of the sunshine last week to tackle the plot at the back and divided the land between humans and bees: half vegetable patch and half wild flower meadow. I left the dandelions and forget-me-nots for the bees and butterflies; John thinks I’m crazy ‘weeding’ around the weeds.

The new insect mansion is also taking shape thanks to my dad’s donation of three wooden pallets and some bricks. I hope to have it finished next week in time for the mason bees to start making their new homes. 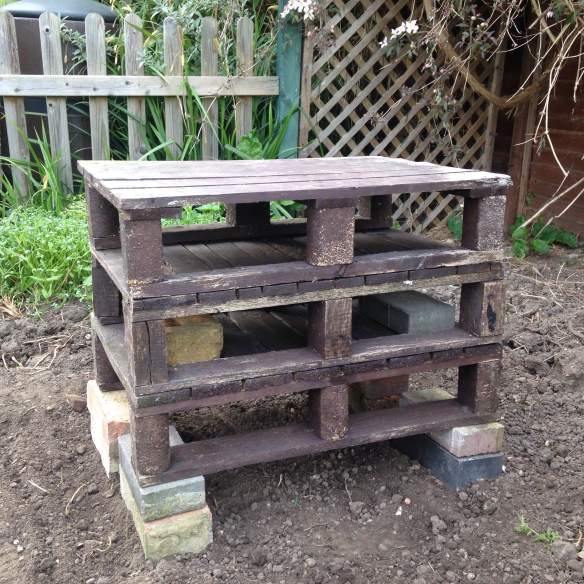 My other life as a backyard birder has attracted a sparrowhawk to the garden. I was surprised to see him one day from the kitchen window. He sat conspicuously next to the feeders and the sparrows watched him from a safe distance.

From the birds and the bees to pond life, we lost our oldest fish Richard coming out of winter.

I don’t know much about ponds, yet, but think Richard died of swim bladder brought on by old age. I found him floating on his side and after looking up advice on goldfish forums, gently lifted him out to try an Epsom salt bath for five minutes. He didn’t struggle and the bath made no difference. I put the poor fish in a shallow glass dish and placed him on a shelf in the pond to die peacefully. The other goldfish came over to have a look, but couldn’t disturb him too much in his glass bed. I told them visiting hours were six to nine. He was dead by morning and buried by John beneath a bush. 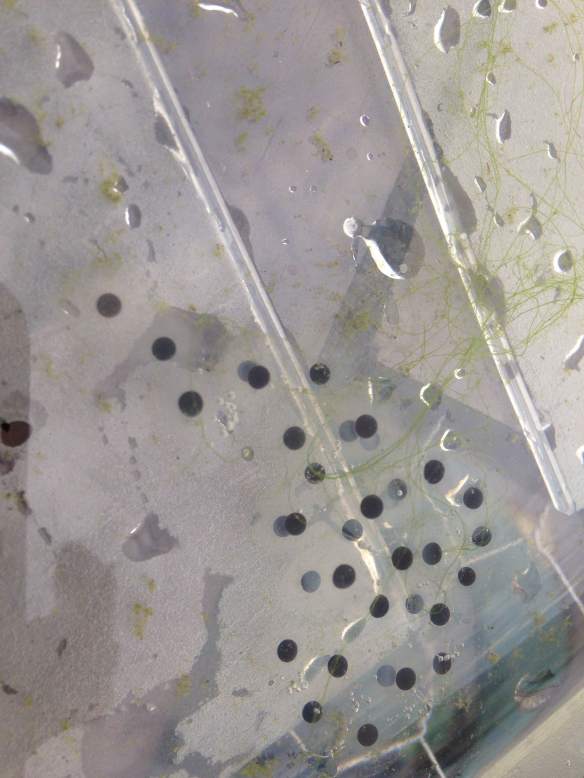 A few days later I cleaned the pond pump, pulled out some weed, and gave the fish a water change. Two frogs had found the pond over winter and provided a frogspawn buffet for the fish. I scooped out half the spawn into buckets to give the tadpoles a chance. You can see the fish were rather curious about where the tadpoles had gone. 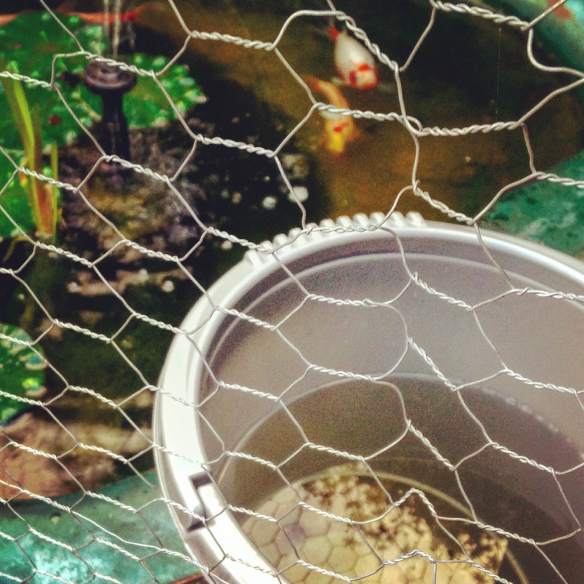 The frogspawn has since hatched and I now have two tubs of tadpoles sitting by the pond. 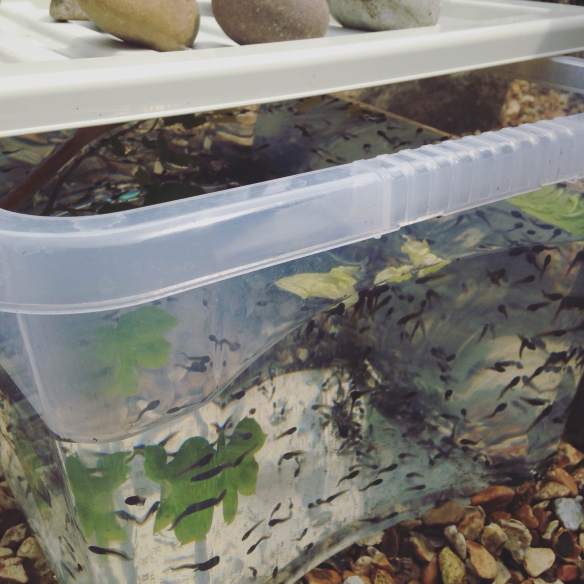 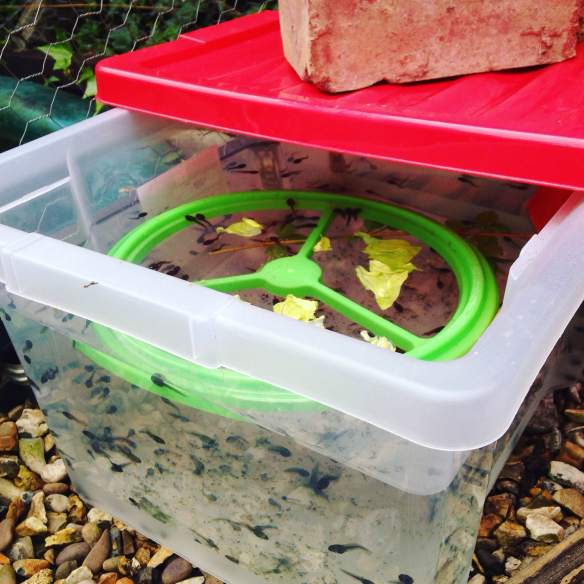 I’ve fed them crumbled fish pellets and lettuce leaves, which they love, along with half water changes each week and they seem to be thriving. It looks like I may end up having more frogs than bees this summer.