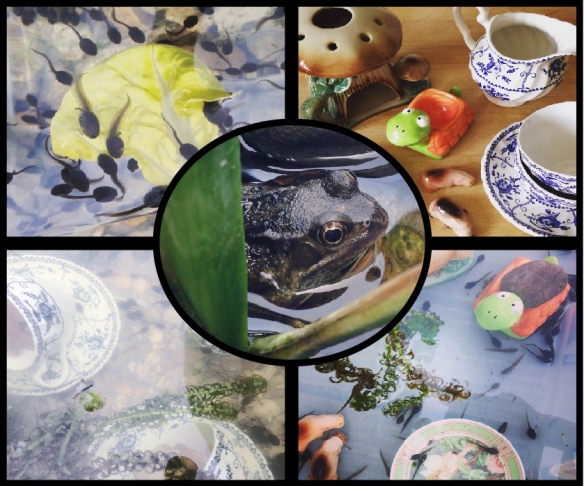 Earlier in summer the weather was lovely for ducks, and also frogs. While the pitter-patter of raindrops on the hive roof kept my bees indoors, the tadpoles enjoyed every splish and splosh in their buckets.

The tadpoles turned out to be the surprise success of the summer. After a busy frog had filled up the goldfish pond with frogspawn in spring, it was moved to buckets to keep the spawn safe during the annual pond clean. A few weeks later, the buckets were teeming with tadpoles and John was worrying about a plague of frogs of biblical proportions on the lawn. “What are you going to do with them all?” he asked, and I replied, “Don’t worry, apparently only a very small number will survive.”

They all survived. I don’t know whether this was due to daily feeds of lettuce and chicken, or diligent water changes every other day (tadpoles are ravenous and mucky creatures). Perhaps it is just a good year for frogs? Anyway, the tadpoles got bigger and they got legs. A trip to the charity store for bric ‘o brac (much cheaper than aquatic store accessories) and the tadpoles also got some new furniture to make their lives more interesting. A tadpole tea party.

One day a froglet hopped out while I was doing a water change. I was so surprised that I simply stared at it and it stared back at me. Then it hopped back into the water.

It was around about this time that I had been clearing up the garden and had rediscovered a disused frog pond under a pile of paving stones. With my dad’s help, we cleaned it up that afternoon and scooped up the tadpoles and froglets into their new home.

Why hadn’t I thought of this earlier? The frog pond is like a deep well with earth, sludge and stones at the bottom which naturally seem to soak up the tadpole waste so the water stays cleaner. The tadpoles seemed to prefer the deeper, darker depths too, and the froglets were soon climbing out to explore their caves. 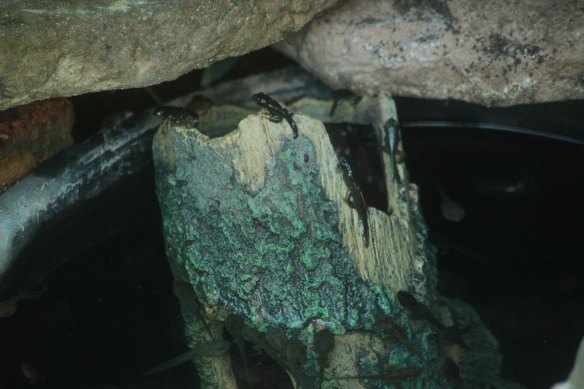 I had read that froglets like to eat insects and rest in damp places out of the water. So I splashed out this time and bought them a frog house to sit by the pond and a solar lantern to attract insects at night. I did actually spy a couple of froglets sitting outside the frog house one evening and looking, I fancied, in the direction of the flickering light.

Summer rain misted into warmer hazy summer days. I bought some more pond plants for the froglets and tadpoles, and occasionally scooped up some debris on the surface and topped up the pond with rain water. The tadpoles no longer needed feeding with the mosquito larvae and extra vegetation in the water, and the froglets spent hotter days floating on the elodea.

Sometimes a froglet would come and say hello while I was gardening. 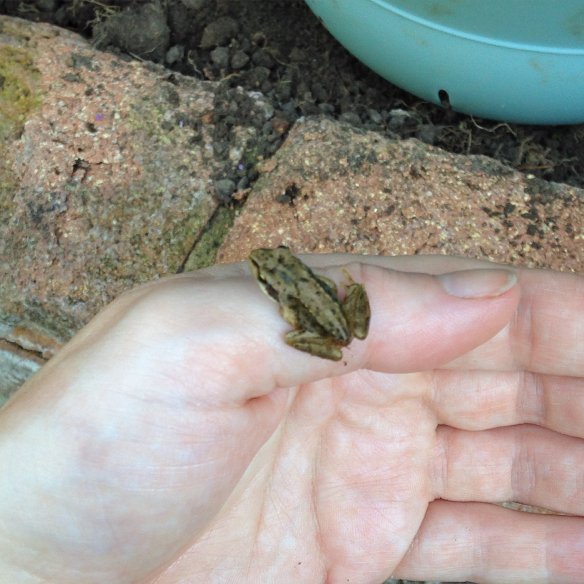 I always put them back in the pond, but they soon hopped out again to return to their favourite spot in the long grass at the end of the walled bed. The spot that I wouldn’t let John or my dad mow down. 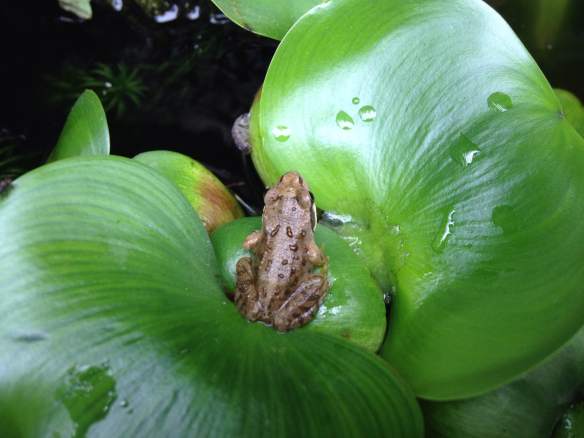 In the shady part of the garden where only the Japanese anemone and the lemon balm will grow, I made a small frog cafe from the old bric ‘o brac that was leftover from the tadpole buckets. 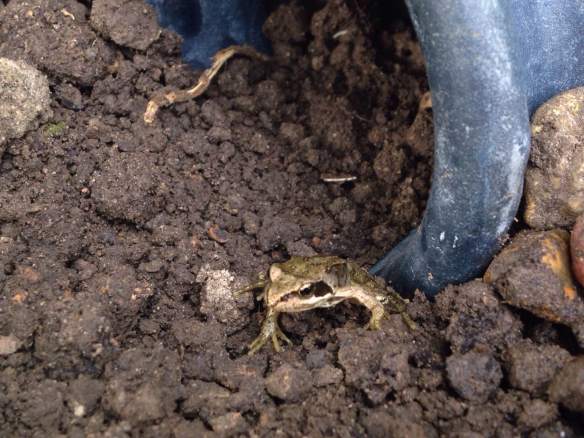 …for they seemed to prefer the slug-ridden holes in the crumbling brick wall. Build a home for nature and it will come in if it feels like it.

Eventually all the froglets did hop away. At least, I’m fairly certain that most of them made it safely out of our garden without being eaten by birds or mowed down by humans. Only one froglet now remains, I think, and I sometimes see him, or her, hopping around the long grass when I go out to look at our late summer blooms. My niece Lauren has named the froglet Hoppy.

While I’ll never know what happened to all the froglets, I hope that I gave them a good start in life. And when the solar lantern flickers on after dark and the frog pond appears to come magically to life, I like to think there are a few more frogs hopping happily around Ickenham. 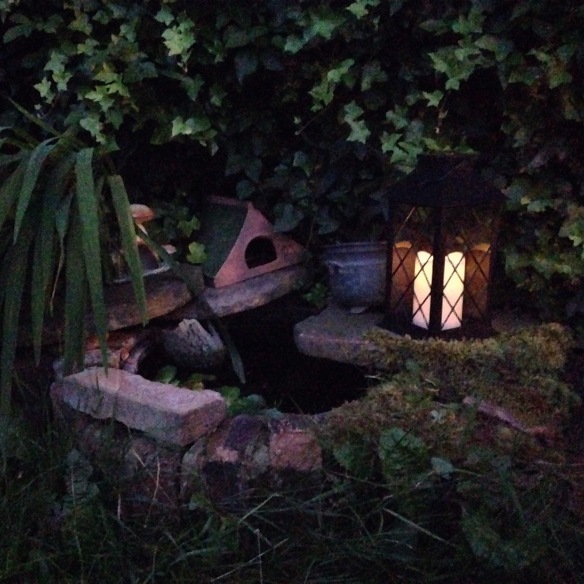 The name ‘frog children’ was inspired by a beekeeper in Iran, @reza__beekeeper, who I follow on Instagram.

19 thoughts on “The frog children”