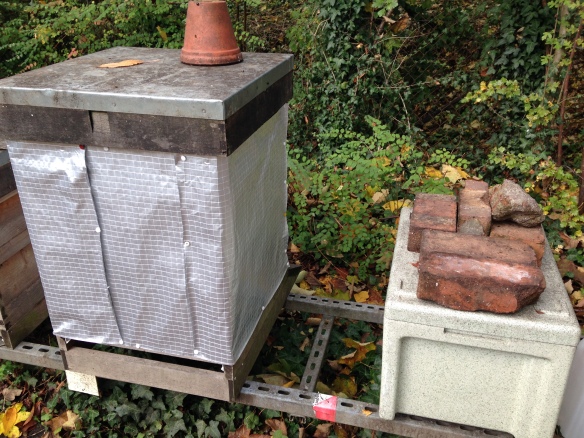 On a bright cold day in November even a bee wouldn’t say no to a hot water bottle and a warm blanket. Patience’s hive showed their appreciation by sending out a small welcome party as I wrapped them up in a polystyrene ‘blanket’ with a hot water bottle resting on the crownboard under the roof.

Honeybees do a good job of keeping themselves warm in winter – if conditions are right within the colony and outside the hive – by drawing on honey stores for fuel and vibrating their wing muscles to maintain an inner nest temperature of around 33–35°C. Sometimes conditions aren’t right, and a colony that has eaten all its reserves, is unable to forage for more, and can’t keep warm inside an empty hive may succumb to the cold.

So how did Patience’s colony arrive at needing a hot water bottle and a blanket? (By the way, you won’t find this way of keeping the bees warm in any beekeeping book.) At the end of August I had left the bees in the good hands of Thomas Bickerdike, of Beekeeping afloat, and John Chapple while I went off to get married. Tom went above and beyond bee-sitting duties by moving our weakest colony to a polynuc, and fitting insulated brood frames at either ends of the nest in the larger colony before closing up the hives for winter. Tom reported both colonies to be queen-right and, with Patience ruling one hive, Emily and I named the queen of the polynuc ‘Hope’, because she was their last hope to survive till spring; as you may have read in my earlier posts. 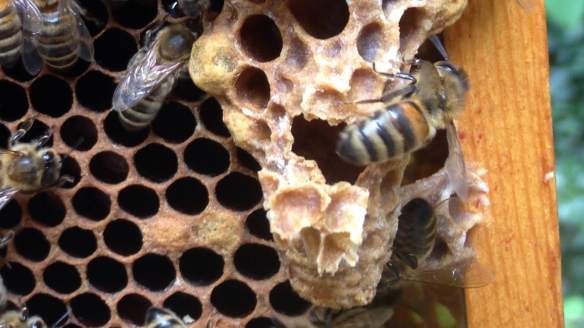 On my way to meet Emily for coffee last month, I stopped off at the apiary to fit the mouseguards and noticed that Patience’s hive was unusually quiet. Hope’s bees were flying to and from the polynuc with pollen and the entrances of the other hives at the apiary were busy too. This stillness outside Patience’s hive wasn’t typical of this particular colony, which is lively even in winter.

There are no ‘rules’ in beekeeping only guidance to help you decide what’s right to do for each colony on any given day. I decided to open up and look inside the hive. The super was half empty and a handful of bees looked like they were slowly freezing on the comb. I took out some super frames to look down into the brood nest where the bees were hardly moving at all. I quickly closed up. Inside the polynuc, Hope’s bees were happily climbing over the frames – I’ve never been a fan of polystyrene hives but it was clearly doing a good job of keeping this small colony warm. (You might notice a lot of bricks on top of the polynuc – these were to make sure it didn’t fly away when gale-force winds were predicted last month; although I really need to order some proper hive straps!)

When I joined Emily in Ealing, I reported my findings and we met up the following Sunday to open up the hive and move the bees into one box. Before the weekend, I went back to the apiary with radiator foil to wrap around the hive and a hot water bottle to put under the roof while I worked. It sounds strange, but it was the only thing I could think of to get some warmth back into the hive. Before I closed up, I saw a few bees starting to move around again on the top bars through the hole in the crownboard. 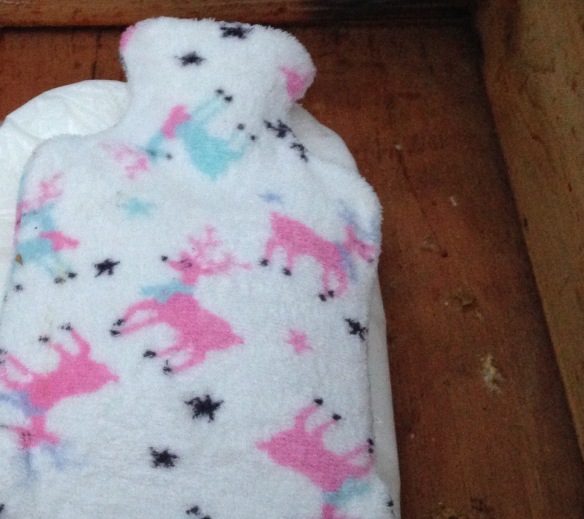 On Sunday, Emily and I suited up, lit a smoker, and opened up the hive. It was bright and sunny but cold, so we needed to work fast. The colony was making use of frames in both the super and the brood, and we couldn’t get them into one box without shaking and more manipulation than we were willing to do on a winter’s day. Instead, we insulated the empty super frames with radiator foil and placed them at either ends of the super as were the insulated frames in the brood box beneath; as Emily mentions on her blog. A few bees started to fly in and out, and we were happy to see them looking livelier. (I’m not in the habit of trying to make bees more active in winter, but nor is the deathly stillness seen inside the hive the week before quite right.)

Not satisfied leaving the bees with insulated frames inside the hive, I returned again during the week with beehive insulation bought from the BBKA shop. I again left a hot water bottle under the roof as I placed the insulation around the hive. The bees were now occasionally flying in and out at a rate that I’ve come to expect of this colony, at this time of year, and they had already eaten a small hole in the fondant. Not surprising given they had nearly eaten all their reserves in the super, but I could see them moving around normally again, for winter bees. They were alive at least! 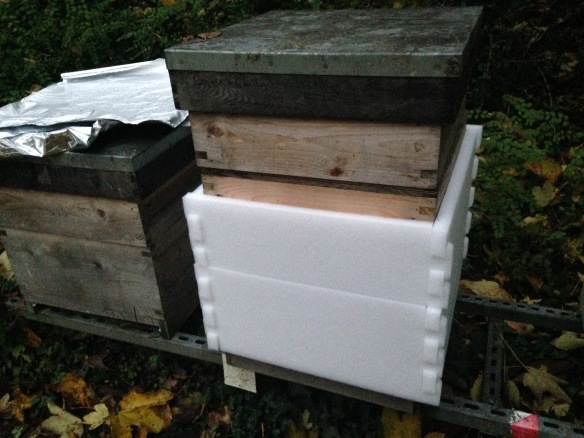 I cut a hole at the top of the fondant to place another block on top – a trick that John Chapple taught us – which I find is a less messy way of swapping an empty fondant packet for a new block of fondant later on in winter.

With plenty of food above the crownboard, insulated frames inside both boxes, three hot water bottles, and a snug blanket around the hive, there’s still no guarantee the colony will survive till spring, but at least Emily and I know we’ve done all that we can. These must be the most pampered bees in London, but with only two colonies Emily and I can afford to spoil them – and we think they’re worth spoiling! 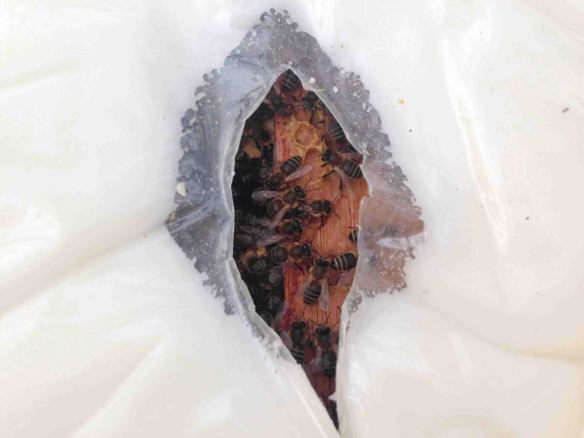 22 thoughts on “How we kept the bees warm”