Our queen saga took an unexpected turn today. After three weeks of waiting to see who would emerge from the queen cells, we discovered the new reigning queen of our hive – and promptly lost her again! 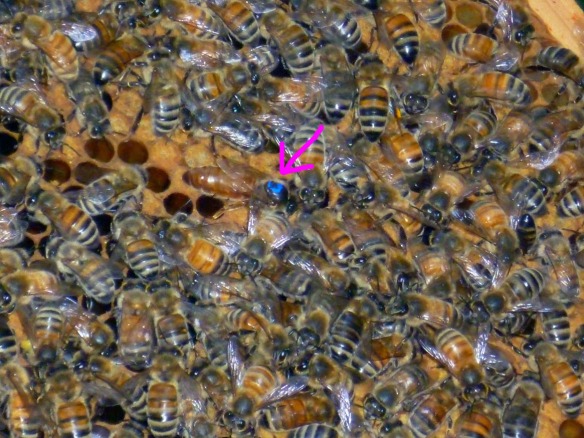 A photo taken of a queen from another hive at the apiary. You see the slightly larger bee on the frame with the longer abdomen and marked with a blue spot? Here, I have identified her with a pink arrow.

Unfortunately, there are no helpful pink arrows in real life indicating the whereabouts of the queen in your hive. Spotting the queen takes practice. A good tip is to observe the movement and behaviour of the workers. They often turn to attend her or move out of the way to let her pass. Thus, the actions of the workers betray the presence of the queen.

However, a queen moves fast and once she realises that she has been spotted then she will run away and hide. Queens are very good at hiding and are difficult to find again. So when you see her, cage her!

Our feisty new queen was determined not to be captured, but Emily managed to cage her while I went to ask Andy, an experienced beekeeper at our apiary, to help mark her. Andy gave us some good tips for practising marking a queen:

Now ready to crown our new queen, Andy held the frame while I marked her with a blue dot through the cage – wrong colour for this year, by the way, but I forgot to pick up the white marker pen as I rushed out my door! – and simples, one marked queen. Or so we thought.

The queen had other ideas. Offended by her undignified treatment – she flew away. Andy managed to catch her mid flight and put her back in the hive, but the queen was clearly determined to abscond and off she went again. Oh dear.

Fortunately, we have a nuc with a spare frame of young brood. We put this inside our hive in the hope that the workers will raise a new queen should our flighty one not return! Andy told us that it is best to choose a frame with very small and young larvae to give the workers the best chance of raising a good and viable queen.

Here is the lovely nuc that Thomas made for Emily and me to house old Queen Rose and her court, you can see how much smaller it is compared to a regular hive. 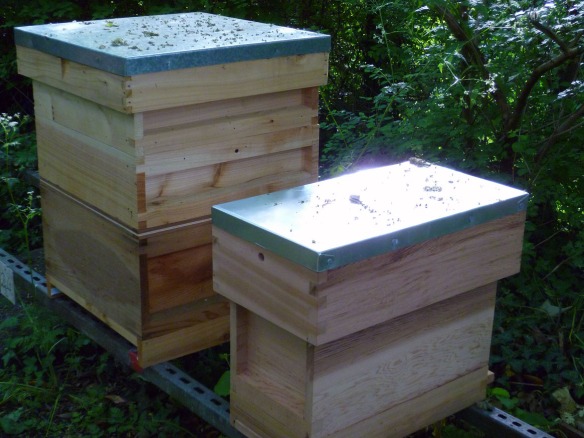 Our nuc appears to be doing very well and is starting to burst at the seams. I really like nucs – a shame that you can’t keep bees in these mini-me sized hives! Here is a photo of a bee sunbathing on the porch.

Depending on the outcome of our latest queen saga, we may recombine the nuc with the original colony and reunite Queen Rose with her older daughters, or if the runaway queen returns then we will need a new hive for the nuc colony. I am going to make new brood frames for our spare hive this week just in case. The best lesson I learned in my first year of beekeeping is never underestimate how much spare hive equipment you will need – and often at a moment’s notice! If you have a spare evening or weekend, swop ironing in front of the TV for making frames!

Today’s baked good was a delicious cherry cake from Emily. While being allergic to cherries, I decided to take my chances and pick the cherries out for our apiary’s resident robins. It was good!

7 thoughts on “The Great Escape”