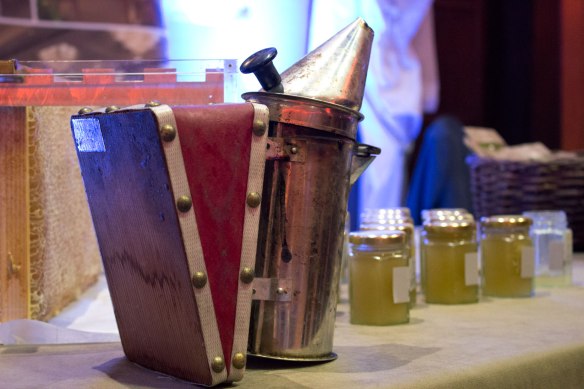 This week I went to the second London Honey Show at the Lancaster London Hotel, which followed the success of the first show in 2011. The London Honey Show is a celebration of the capital’s urban beekeeping culture with talks, bee-and-honey stalls, competitions and prizes. The show drew crowds of people from those who keep bees to those who are simply interested in bees and honey.

Karin Courtman, London Beekeepers Association (LBKA), gave a talk on ‘Stories from an urban beekeeper’, which was particularly pertinent given reports hitting the news again that London bee numbers ‘could be too high’. This is not news for beekeepers who have kept hives in the capital for many years and who have noticed a steady fall in honey yields. A healthy hive would normally produce 40lb of honey, but in 2011 the average was 20lb per hive and in 2012 just 9lb per hive.

‘There has been an explosion in urban beekeeping in recent years,’ said Karin. ‘The government figures on BeeBase show an increase in registered hives in the city from 1,617 in 2008 to 3,337 in 2012. However, Fera [The Food and Environment Research Agency] estimate that only 25% of beekeepers register their hives so numbers could be much higher.’

A single, healthy bee colony is home to around 50,000 bees during spring and summer, so if there are 3,337 hives and counting then that’s a lot of hungry honeybees in the city; add to that the numbers of other bees species like bumble bees and solitary bees, and other insect pollinators like butterflies that also live in London. Karin’s talk took a look at the maths: just one hive needs 120kg of nectar and about 30–50kg of pollen to sustain the colony throughout the season. That’s a lot of nectar and pollen, ‘Planting one or two lavender plants in your garden isn’t nearly enough!’

So is the question ‘Does London have too many bees?’ or ‘Are there enough flowers in London?’. Karin thinks, ‘We need to be looking at nectar and pollen across London in a much more joined-up way and thinking about food sources for other bees and butterflies too.’ 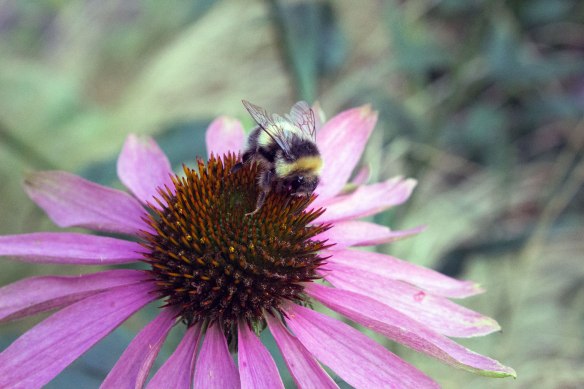 Habitat loss is a major cause of insect pollinator decline throughout the UK. Are there enough bee-friendly plants in London to sustain pollinators like this bumble bee seen foraging on echinacea?

The good news is that by planting more bee-friendly trees and flowers in London’s parks and gardens will not only improve life for insect pollinators but improve life for humans too. ‘Kids love to visit wildflower meadows and see not just flowers but hundreds of bees and butterflies.’

LBKA is starting a survey with beekeeping partners in north London to gather evidence on honey yields. Karin reminded us that everyone can help bees, not just beekeepers, by spreading the word, joining the communities and discussions online, and by planting lots more bee-friendly trees and flowers.

I have lived in London all my life and it is easy to see how spaces around the city could be improved for wildlife. Councils need to be encouraged to buy plants that are not just beautiful for people to look at but useful for insects too. I would like to think that this news will spur on a similar explosion in insect-friendly gardening.

On that theme, Frank Minns, Royal Horticultural Society (RHS), gave a relevant talk on ‘Bee-friendly planting’ and how to plant trees and flowers for bees all year round. The RHS provides a list of plants for bees but Frank gave some interesting tips on types of gardening that bees love. ‘They go for “cold” planting as opposed to “hot” planting,’ he said. ‘Think of blues and whites, “cold-coloured” plants, which bees prefer to reds and oranges, “hot-coloured” plants.’ The traditional Mediterranean herbs are well-known favourite of bees and they are fond of daisies and echinaceas. These are all plants that are good to keep in the garden for culinary use too.

Bees love myrtle and the flowers provide a valuable source of forage in late summer and autumn. This pretty myrtle lives in the Medicinal Garden of the Royal College of Physicians, but it can be planted as a border or hedging plant in parks and gardens.

I was pleased to hear Frank expound the virtues of myrtle (Myrtus communis) as an alternative evergreen border plant to privet. Myrtle is one of my favourite plants with pretty white flowers, dark berries and rich green leaves. It yields a beautiful essential oil.

James Dearsley, the Surrey Beekeeper and founder of The Beginner Beekeeper’s Page on Facebook, gave a good overview of bees and beekeeping from the plight of the honeybee and unprecedented hives losses in the US and UK in recent years, to the enjoyment of a wonderful hobby in which you never stop learning. ‘The waggle dance is a figure of eight motion performed by the bees to tell other bees what direction to fly to reach good sources of food. It is accurate to within one foot over three miles, despite the Earth moving slightly in the time that it takes for the bee to fly from the flower and back to the hive. That’s pretty accurate!’ There were also a few controversial facts like ‘male bees do all the work’, which, of course, we all know isn’t true!

James’s talk reminded us that beekeeping is a lot of fun – you get to do cool stuff like feeding this bee sugar syrup on my thumb!

James concluded with five useful tips on how to get started in beekeeping:

The talk was well-received by the audience. A lady from the US told me it had made her think about keeping bees in her garden. In her part of the world, black bears can be a problem to gardeners, but James’s talk had encouraged her to get in touch with her local beekeeping community to see how they tackle this challenge!

After the talks there were displays and stalls to visit and the Honey Ceremony to close the evening. A prize was given to Sharon Bassey, from LBKA, as this year’s winner of ‘Beekeeper of the Year’ for her work with children and beekeeping. James Dearsley presented the award and also made the generous gesture of auctioning a book on behalf of Bees for Development, a fantastic charity that supports beekeeping in Africa. 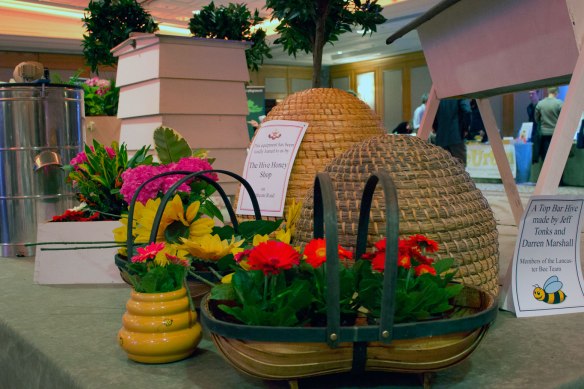 A display of different types of hives at the London Honey Show from old-fashioned woven skeps to WBCs and top-bar hives.

A huge thanks to Jo Hemesley and the beekeepers at the London Lancaster rooftop hives for running another great honey show to celebrate urban bees!

This is not new news:
The Lost British Summer, Emily Heath, Adventures in Beeland, writes a thoughtful post on whether there are too many hives in the city.
Are There Too Many Bees In London?, Deborah DeLong, Romancing the Bee, asks the question following a tough year for bees in the UK.

Why not also visit:
The London Beekeepers Association
Royal Horticultural Society
Bees for Development
The National Honey Show runs from 25–27 October 2012
Surrey Beekeeper for all your beekeeping needs
The Buzz around Lancaster Gate

Register your hive on BeeBase – the website provides a wide range of free information for beekeepers, to help keep your honeybees healthy and productive.

Plant bee-friendly plants in your garden:
RHS plants for bees
A plant study of myrtle

There is a huge beekeeping community on Twitter, which I have collected as a list Bees & Beekeeping.

EDIT: Following this blog post, there have been repeated reports in the news that unfortunately give an unhelpful view on beekeeping in London:

While it is worth opening debate to ask whether increasing numbers of hives may have an impact on both amounts of forage and populations of other insect pollinators, this nuance is lost in reports that are currently based on anecdotal evidence and opinion. Reporting of figures has become confused and journalists fail to capture other factors that have led to low honey yields this year, such as poor weather, bee diseases and perhaps badly mated queens, all of which may effect the amount of honey produced by a colony.

Several inaccuracies have crept into reports. For example, the Mail Online reports: ‘Without the necessary food, bees get sick as disease passes through the hive, infecting all the insects’. Again, there are many factors that could contribute to immune stressors and diseases within the hive, not just lack of food.

In addition, the forage debate appears to have become diluted with the separate topic of the education and training of beekeepers.

All in all, the style of reports has sparked much speculative comment without canvassing expert opinion or evidence-based research. The talk above is about opening debate based on some growing concerns, but it is too early to reach conclusions.

As the bees rest over winter, it is a good time for beekeepers to reflect on the season and to have debate. Let’s hope that future discussions involve garnering wide-ranging expert opinion, surveying the views of members from all local associations in London (of which there are many who represent urban beekeepers), and seeking out the evidence before making more statements to the public and press.