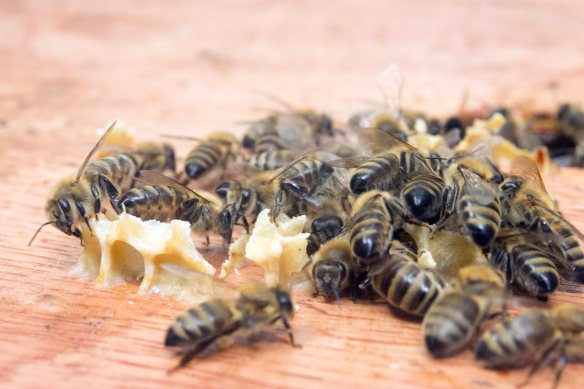 Last post Emily and I were in the thick of it. We had to abandon combining two hives as angry bees got the better of us.

So the following Tuesday evening we met at the apiary and pulled on bee suits over smart work dresses and heeled shoes. Emily was wearing a beekeeping jacket that left her legs perilously bare – but it was the mosquitoes, not the bees, who feasted.

Rose’s colony was more bad tempered than ever and, although we couldn’t find the queen, we were almost certain the colony was queenless. The bees have been trying to supercede Rose since spring and our artificial swarms only delayed their efforts to overthrow the reigning monarchy.

We laid a sheet of newspaper over the brood box of Chamomile’s colony and moved over Rose’s colony, then left the apiary hoping for the best. Emily revisited the following week and removed the newspaper, which was mostly chewed away by the bees. All seemed well. In the time the bees had eaten through the newspaper they had gotten used to each others’ smell and were one happy colony. This was also an indication that Rose had gone as the two colonies were more likely to fight if two queens had been present.

A Saturday went by as we shopped for wedding and bridesmaid dresses for Emily. Today was the second Saturday of the August and the apiary was lovely and peaceful as the association held its monthly scout hut meeting. However, we had both forgotten to bring a smoker and the noise of irritated bees soon filled the air.

Myrtle’s colony was well behaved and, as we’ve never smoked these bees, we were able to check both brood boxes and spot our shy queen. I’m rather proud of Myrtle. She is in her second year of being a queen and is still making nice, well-behaved bees.

Chili’s and Chamomile’s colonies were much feistier. They are the daughters of Rose, the queen of the colony we bought from Charles. We managed to check a few frames before they let us know that we should have brought a smoker. All seemed well inside the colonies though. We have three strong hives and apparently enough honey stores for winter. Myrtle, Chili and Chamomile are our autumn queens – an interesting blend of essential oils, I might try it!

At this time of year the bees start to prepare for winter. The queen lays less and the workers bring home propolis to insulate the hive. They are more protective of their honey and on guard for robber bees, wasps and other pests who might want to steal their precious stores. This can make them less tolerant of beekeepers too.

Emily spotted drones being pushed out of the entrance by workers and a few wasps were buzzing around the roofs and floors.

A useful strategy for dealing with autumn wasps entering hives via @DrBeekeeper on Twitter: The Battle of Wasps attacking Bees http://bit.ly/15k9a9r

29 thoughts on “Autumn is coming”