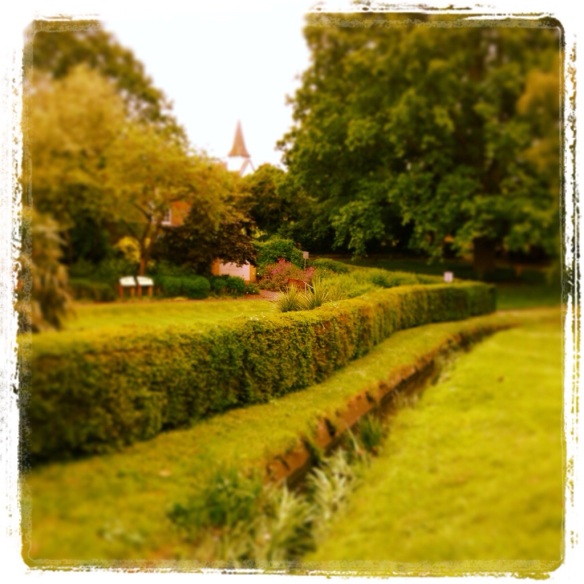 As wet bank holiday weather drizzled into the week, I found myself thinking of the virgin queens emerging from our split hives waiting for a dry spell to fly out and mate.

Three weeks ago Thomas and Jonesy had artificially swarmed Chili’s and Chamomile’s colonies after finding queen cells in the hives, leaving Emily and I two new hives and queens-in-waiting.

Last Saturday’s approaching thunderstorm had given the bees a headache and made hive inspections impossible. Then as the storm broke it became a typical Ealing beekeepers’ day with beekeepers huddled around tea, accompanied by Polish cheesecake made by a beginner.

Thomas returned to inspect his hives later on that weekend and checked ours too, reporting back that it appeared a queen cell had been torn down in the hive split from Chili’s colony and that a queen cell was open in the hive split from Chamomile’s colony. Our other three hives were doing well, he said, and he had spotted queens Myrtle, Chili and Chamomile, although the latter’s hive was not much bigger than a nuc.

So that’s where we left the bees, seemingly well since I had seen them two Saturdays ago. I got to the apiary early today as there would be five hives to inspect, and I wanted to consolidate our hive equipment to make sure we had a complete hive ready should Myrtle’s colony also decide to start building queen cells.

A keen beginner Freddy arrived not long after and was interested to hear all about our latest hives. Freddy thinks he might like to keep fierce bees, because they make more honey and he would like the challenge. In that case, I told him, he is welcome to Chamomile’s feisty hive! Although Emily and I need to wait a few weeks to see how the split colonies develop, find out who are the best queens, and decide whether we’re recombining or selling hives.

Another beginner arrived as Freddy and I were talking so it seemed a good idea to open up and start inspecting. A look through Myrtle’s colony showed no sign of the queen except some young healthy larvae, and the laying pattern of the brood was patchy with drone comb spotted in the centre of some frames. Not a great sign of a well-laying queen but otherwise the bees looked happy. The stores seemed surprising low compared with two weeks ago, so I put on a syrup feeder. 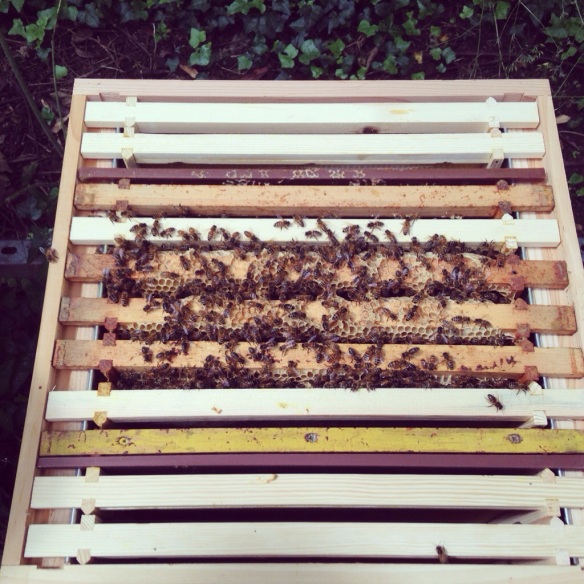 Emily arrived as I was about to brave opening Chamomile’s hive, which I was feeling nervous about. Thomas was right, this was little more than the size of a nuc colony and Emily noticed they had almost no stores. I felt annoyed with myself – I’d been so good all year feeding up the bees until the start of May, when we had started to reduce feeding, and it had seemed all was well two weeks ago, that I hadn’t thought to continue feeding. Now the bees were looking starved and miserable because of a couple weeks’ rain. We put on a feeder and luckily the syrup I had made for the bees before taking a break for three wedding-themed weekends would be enough for all five hives today.

Chili’s colony was next and though I didn’t see the queen, again the bees seemed calm but needed feeding. ‘Is that all now?’ asked Emily. No, we still had our two split hives to check – five hives is really quite a lot!

Fortunately Freddy wasn’t tired of looking at bees and did a beautiful job of inspecting our first split hive and finding Chamomile’s daughter – the new queen looked just like her mother, I hope she turns out to be better tempered. We then turned to our second split hive and were unable to find a queen or sign of one. I suspect this split has failed and will need recombining with Chili’s hive next week.

Five hives doesn’t leave much time for tea and cake, and by the time we had cleared up our equipment the chattering crowds were gone from the apiary.

Five years a beekeeper and five hives on there is much to think about how and why I want to keep bees in the future. Honey is playing on my mind, but for now it was time to go home and leave the bees to decide what they will do next.

33 thoughts on “Five years a beekeeper”