“How long do bees live?” Ruth asked me at work. It’s a good question. I replied, “Six weeks in summer and around five months in winter, while queens can live for two or three years.”

It was funny to hear Pat get asked the same question by a family of new beekeepers on Saturday. Though it’s late in the year for visitors, a curious crowd had gathered to find out more about the bees. “The workers live for six weeks in summer, but now they’re fattening up to live longer over winter,” said Pat, as Jochen, Emily and I hovered behind to listen. David had opened his green hive to give the new colony a quick inspection before winter.

An observant beginner pointed at workers on the side of the hive with raised abdomens. I could hear Emily explain about nasonov glands and releasing pheromones for other bees to find their way home. “Sort of like a homing signal,” said the beginner.

It was lovely to enjoy a beekeeping lesson at the apiary and to hear the ‘oohs’, ‘ahhs’ and gasps of beginners. With not much beekeeping doing, the winter months are a chance to enjoy the company of beekeepers.

Emily and I put the mouseguards on our four hives this week, with a few pins from Jonesy, and topped up the feeders. Our dry sugar experiment hadn’t worked out, so I took away the bags. Like children who realise they can no longer play with an unwanted toy, it was only then bees scrambled up to drag down spilled sugar. 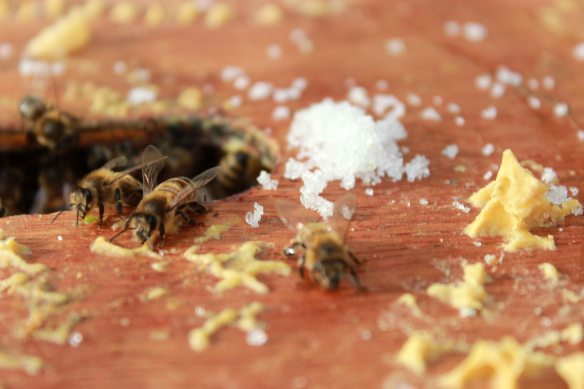 Melissa’s clever bees had also built their own honeycomb cover for one of the holes in the crownboard.

Chamomile’s hive had more diarrhoea at the entrance. It is a worry but there is not much we can do to treat nosema. Emily has Thomas’s thymol recipe to make up at home, but I’d be happier to get this colony shook swarmed in spring.

The mild autumn has kept bees, and wasps, active for longer. The wasp problem seems to have sorted itself out with only one or two lingering around hives. As I told a beginner, I hoped the bees flying out and about could find forage to replace all that honey they were eating to sustain their unseasonal activities.

A puff of smoke to clear the bees… 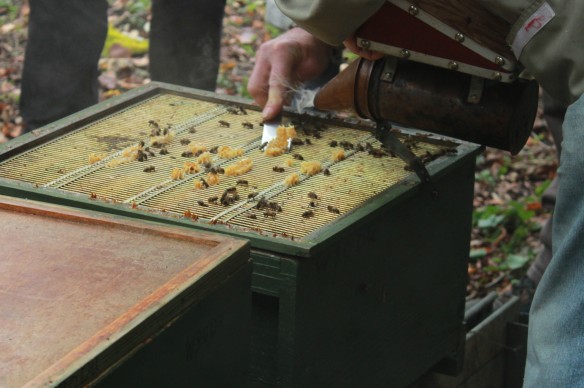 … as David cleans up wax from the queen excluder.

In fact, this autumn seems to have confused bees and beekeepers alike with some still opening hives for inspections. I asked Alan and John their views. Alan was firm this does more harm than good, “You’re letting out all that warmth and breaking up the propolis. Leave them alone.” When I said that some had even found queen cells in the hive, Alan just shook his head and shrugged: “They’re not going to mate now and there’s nothing you can do. Wait till spring and if you have a drone layer, then replace her.” Personally I agree. Sometimes we have to let nature alone and accept what will be.

Jochen puts his hand over a hole in the crownboard to feel the warmth that the bees generate inside the hive, probably around 30°C.

Sitting at the table I remembered how much I enjoyed being an Ealing beekeeper. Perhaps one day when I keep bees away from the apiary I’ll be able to enjoy visiting just for tea and cake. Jonesy and Stan checked out the suspected wasp nest, confirming it was indeed a wasp nest. Stan even offered to remove it, but we all agreed that the wasps will die out soon. Better to give the wasp queen a chance to fly away first and find somewhere to hibernate till next year.

That done, the Ealing beekeepers cleared up tea cups and brushed off biscuit crumbs. It was time to leave the apiary gently humming in the warm autumn sun.

Postscript notes
Aside from the wasps, this has been a great year beekeeping. Check out my new blog index for posts on this year’s and past year’s beekeeping adventures, along with posts about lots of other things!