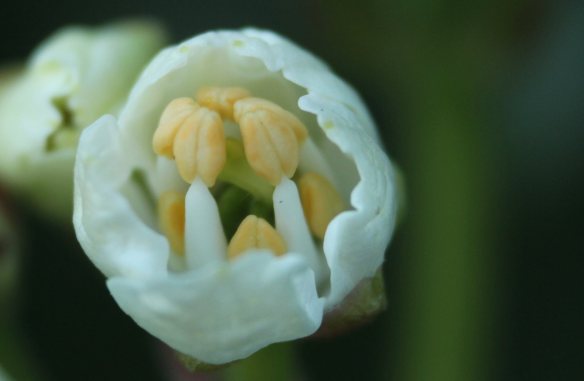 In Finland a cold snap in spring is called ‘backwinter’, because winter has come back. Yet it was only a few weeks ago in April that everything was coming to life in the garden.

As this is my first year as a Maund, I took a photo of these delicate white blooms on a shrubby bush on Maundy Thursday, which fell on Thursday 13 April. In the Christian calendar Maundy Thursday marks the beginning of the three-day period before Easter, while in many Pagan beliefs it was Green Thursday and celebrated the return of nature in spring. Until not so very long ago, and perhaps it happens still, it was traditional for country churches to decorate the altar with white-and-green flowers for Maundy Thursday.

But on the first of May the unopened buds were stubbornly refusing to wake up and everything was cold and still in the garden once more. In London winter coats have made a comeback. I was tempted to pick a bunch of the white flowers for a vase in the kitchen window, before they all fell off, but then remembered that there is a wealth of folklore warning us not to pick white blossoms and bring them indoors, unless you also want to invite misfortune.

My mason bees have not yet emerged from their cocoons and now I fear they won’t. Even if they do awake, our apple blossom has fallen and the dandelions have gone to seed puffs. All that remains of spring is the memory of glorious yellow lions on the lawn shaking their manes at the sun, pretty cowslips gathering in hedgerows and bright orange marmalade flies hovering on leaves (both the marmalade fly and the cowslips below taken on a visit to the old cathedral city of Wells in April). 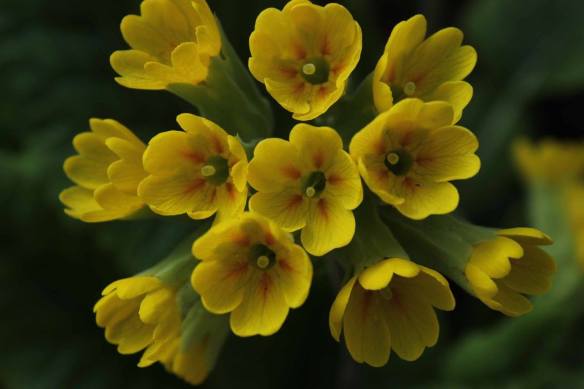 The tiniest flowers in the garden, escapees from the wild, appear to be the hardiest like this Herb Robert (Geranium robertianum), I think, growing around the apple tree. If it is a Herb Robert, then it’s also known as dragon’s blood. Well, just look at those splendid red claws. 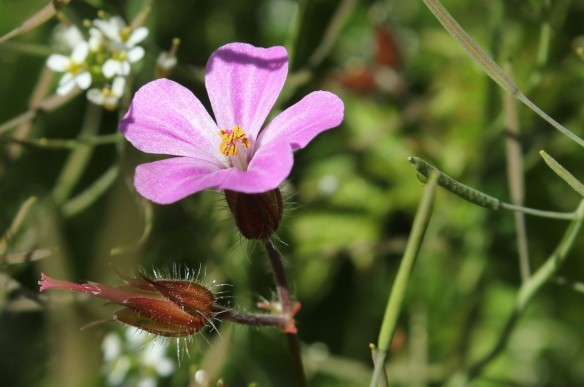 In the pond the frogs have returned, but they too were fooled by the warmer temperatures in spring and spawned too early. The frog spawn became frothy with the black eggs turning white as temperatures dropped, and it has now all dissolved away. So it seems we will have no tadpoles either this year. At least the frogs have the fish for company. 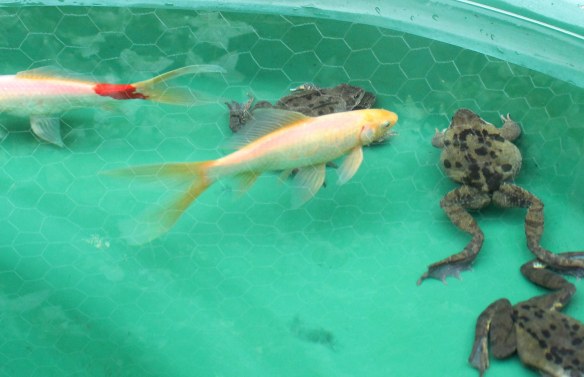 And the occasional eyes-in-the-sky to stare at. 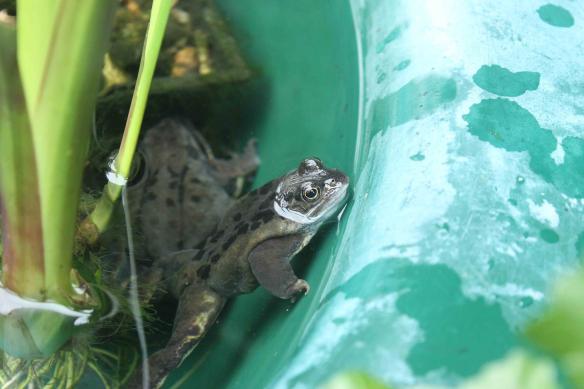 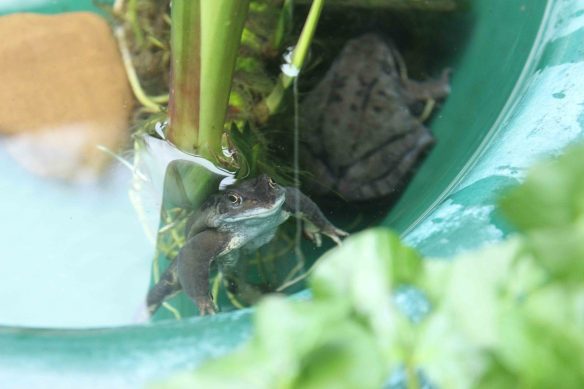 At the apiary the queens are coming. It seems that the bees do sometimes read my blog. Last bank holiday Monday, I found five queen cells (three unsealed) in Hope’s hive (Hope was still inside the hive) and all were on an old brood frame that needed to be swapped for a new frame. I took out the queen cells to give to Patience’s hive (who are so ill-tempered they are most likely queenless) and gave Hope’s hive another new brood frame (well, two actually) to play with. As there were no other queen cells (that I could see) in Hope’s hive, and the bees had two new frames to work and a cold week ahead, I thought it was safe to close up and wait till Saturday to inspect again. Not so.

Yesterday, we found out that the bees had not been told about backwinter and they had been very busy. During the beginner session at the apiary, around three or four frames (maybe more but it was difficult to keep count during the class) had queen cells – some sealed and some unsealed – and this time the queen could not be found. Instead, we did a split of the hive by removing a frame of queen cells and putting these with some frames of brood, bees and stores in the polynuc. After the past year of failed queens, I’m not going to complain about having too many queens this year!

In Patience’s hive the queen cells were still intact and being nursed, it seemed, by the workers. So we have three hives waiting for new queens to emerge. Quite exciting!

After the beginners had left the apiary, Jochen and I went with John Chapple to look at his hives, which are all doing well after their shook swarms, with the exception of one that might be headed by a drone layer or else entirely queenless. John had brought a few empty queen cells for show-and-tell earlier and Kathy had talked about dealing with queen cells, splits and culls.

For me, the queen cell shown above was a rare glimpse into the secret life of the honeybee queen. It had been found perfectly intact and before the workers could efficiently take it down to make use of the wax. You can see where the virgin queen had carefully ‘taken off the lid’ as she emerged from her cell into the complete darkness of the hive. As I held the cell in my hand, I wondered whether she was the first of her sisters to emerge and whether she would stay to rule the hive or fly off in a swarm. But even when still inside their cells, the ‘unborn’ queens sometimes ‘quack’ to make the others aware of their presence and of the deadly duals that may follow if they cross each other’s path after emergence.

As a beekeeper I can only wait-and-see which queens will emerge first in our hives – and keep my fingers crossed for a ‘backspring’ to welcome them.

From one secret dark place of the earth to another – mysterious glowing eggs seen in the caves at Cheddar Gorge in April. I’ll leave you to contemplate this strange mystery, while the bees are left to theirs. 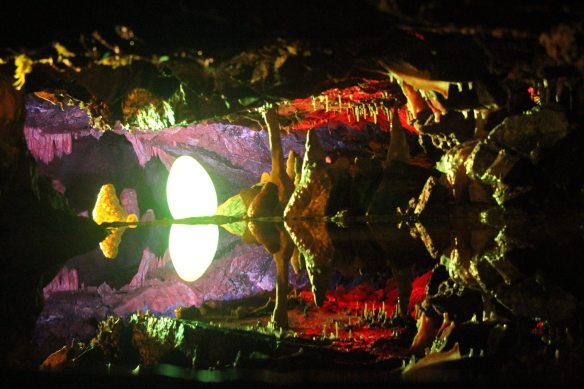