The spiders spin their crafty webs between the autumn sedum in September. Thousands of tiny pink star-like flowers open to welcome honeybees in their dozens to drink from a forest of nectar.

The bees trip over themselves to visit every single flower. They fly carelessly close to silken strands where garden spiders dangle beneath the leaves waiting to pounce. The bees’ tantalising electrical charge in the air attracts the webbing even closer to their wings.

I think the variety of sedum in our garden is autumn joy? The large clump of ungainly leaves growing out from the bottom of the decking had looked suspiciously like a weed to untrained gardeners’ eyes. “I’ll dig it out for you,” my dad said, eager to clear away overgrown foliage from our garden. “No” I replied, “We’re waiting to see what everything turns into this year.”

The green clusters have slowly exploded into bright pink blooms over the past couple of weeks. “Is there a nest of bees in the garden?” John and dad both had asked me. “No, just the autumn sedum,” I replied.

I was tempted to brush away the spiders’ webs to protect the foraging bees. But who am I to interfere and deprive a spider of her dinner? The sedum looks well established and it’s likely this dance between spiders and bees has been going on for decades in our garden. So far I’ve counted only one mummified bee in a web, the spiders are hardly winning.

The nectar flow is usually considered to be over by many beekeepers come late summer to early autumn. However, as I watch the bees in the garden few appear to be pollen collectors. Their baskets are empty as they search for every place on the flower beds to drink. This gives me hope that autumn forage will bring both more nectar and pollen to the hives, if the bees can withstand the chilly drop in temperatures.

This hardy warm-blooded bumblebee in a garden centre seemed less bothered by the cool day than the cold-blooded honeybees.

At the apiary table beekeepers were taking a pause for tea, and honey fudge bought by Emily from her holiday. “This looks far too posh to eat,” complained John Chapple. “I think you should wrap it in Christmas paper,” agreed Stan. Emily cut the fudge into cubes for the beekeepers to (reluctantly) eat.

Talk was on about this year’s National Honey Show with Jonesy being persuaded to take part. I shared a tip passed-on by Dev from last year’s honey judges. To get out more air bubbles, spread cling film on the surface of the honey and leave (perhaps 20 minutes) then peel off…

… air bubbles cling to the film and lift off. I’m not sure of the physics behind it, but it works. Clearer honey!

Our three hives have ended the summer queen right. With the honey crop off and the Apiguard treatment finished, we’re checking the bees are bedding down properly for winter. To prove the point, Melissa’s colony had stuck down the hive roof hard with lots of propolis.

Peppermint’s hive was low on nectar stores (we hadn’t harvested from this artificially swarmed colony) although packed-full of bright orange pollen. There were also piles of beautiful orange pollen dropped at the bottom of the hive. Be more careful with your shopping, ladies! Going through the frames it was clear this hive would need autumn feeding to meet their quota of 20–30 lb of honey to survive winter. The bees were well behaved despite the low amounts of stores and brood in the nest, which would usually make a colony quite grumpy. 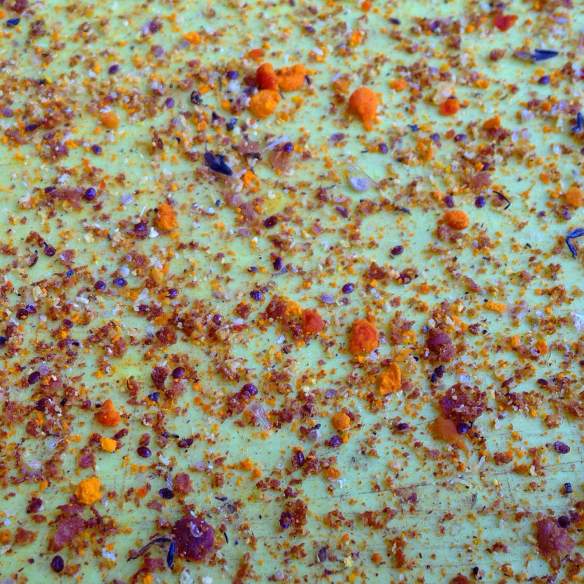 In Melissa’s and Pepper’s hives the August wash-out had made the bees tuck into their put-away stores and left the returned wet supers unfilled. A reminder of how quickly things can change in bee land. Emily and I may decide this month whether or not these supers now need to be taken off for safer storage against wax moth. There’s no hurry, we’ll wait and see if the forecast Indian summer makes any difference.

We didn’t spot the queens this weekend, but the bees were behaving as good as gold so their majesties must be at home. I wondered if it might also be the effect of Jochen standing nearby. This German beekeeper seems to have a calming influence on our bees.

Emily holds up a brood frame from Melissa’s colony. The hive had completed a Bailey comb change in the spring, yet how quickly the golden honeycomb turns brown after one summer of brood. It makes me think of how many bees have emerged from each cell leaving behind a cocoon.

The summer holidays felt like a distant memory as we talked about getting ready for winter. Autumn is always a reminder of how fast time flies.

Two bees chat about their summer holidays while sticking propolis to the hive roof.

One sunny afternoon this week, I ambled through the Medicinal Garden of the Royal College of Physicians and stumbled upon this beautiful bumble bee foraging on echinacea. 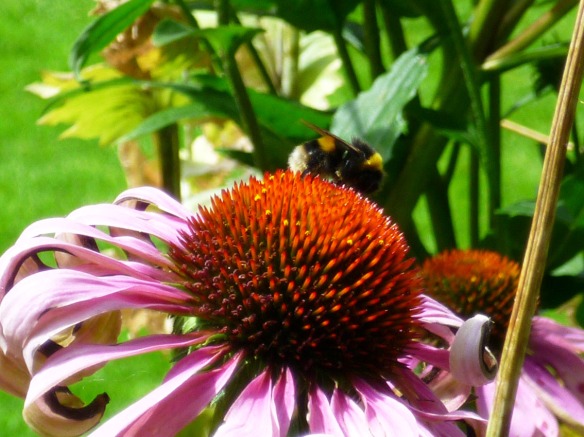 I love bumble bees! Like butterflies and ladybirds, bumble bees are one of the few insects that everyone loves. They are fat and fuzzy, their familiar buzz heralds the start of spring, and they look impossible when they fly. Here are five things you should know about our friendly neighbourhood pollinators.

#Factoid 1: Bumble bees are very messy
Bumble bees are notoriously messy. Unlike honeybees who build tidy hives with perfect hexagonal combs to store brood, pollen and honey, bumble bees will nest underground in abandoned mouse holes or beneath dense grass or piles of leaves. If you have a compost heap in your garden, it is likely that one summer you will see bumble bees flying in and out. Don’t fret. Leave them alone and they won’t bother you. The nest will die out at the end of summer and the queen will find a new home next spring.

#Factoid 2: Bumble bees make honey
Like all bees, and even wasps, bumble bees do make honey. However, bumble bee colonies do not make enough honey for beekeepers to harvest – which is why we don’t keep them! Bumble bees produce honey to feed the colony during spring and summer, but they do not stock their larders for winter because only the queen survives the winter.

Bumble bees don't forage more than a few hundred metres from their nest. Somewhere nearby there is a secret underground lair with wax cups of echinacea-flavoured honey!

#Factoid 3: Bumble bees are like wasps!
Don’t be offended bumble bee lovers, but the bumble bee life-cycle shares more similarities with wasps than honeybees. At the end of summer, all but the queen will die. She survives to hibernate underground with a few cups of honey to sustain her through winter. In spring, the queen emerges and flies out to find a new nesting site. She will start building an untidy nest around her and lay eggs. When enough workers have hatched, they will take over the job of nest building and foraging, and leave the queen free to continue laying eggs.

Like wasps, bumble bees also do not die when they sting. So be warned! Almost all bumble bee species are gentle-natured and reluctant to sting unless provoked. However, the species Bombus hypnorum, the tree bumble bee, has been known to be more aggressive and their nests are fiercely guarded by drones. This species is identifiable by its distinctive ginger stripes and white tail. Give it respect!

#Factoid 4: Bumble bees have smelly feet
It’s true. Bumble bees produce oily secretions from their feet to let other bees know which flowers they have visited. This tells other pollinators, including honeybees, that nectar has already been foraged from the plant. Rather thoughtful of them.

I don’t know if bumble bees wipe their smelly feet, but perhaps this is why honeybees don’t welcome bumble bees in their hives. I have been told by beekeepers, if a bumble bee aimlessly ambles into a honeybee hive, she is promptly picked up either side by two guard bees who escort her out.

#Factoid 5: Bumble bees are from Krypton
Like Superman, bumble bees need the warmth of the sun to fly! Bumble bee bodies are naturally cold and they cannot fly until they have been warmed by the sun. If you find a bumble bee appearing to stumble slowly about a shady flower bed, gently place her in a sunny spot where she won’t be disturbed. Hopefully, she will warm up and fly back to her nest.

You can read more fascinating facts about bumble bees at the Bumble Bee Conversation Trust. You can also help save British bumble bees by joining the trust for as little as £2 per month.